Architect OMA has revealed its plans to transform a former transport hub in Jersey City into The Centre Pompidou Jersey City.

The four-storey building was originally built in 1912 as offices and incorporated a trolley station. It was later converted into an education building.

OMA will transform and restore the building, incorporating original features such as its brick and limestone facade, public service emblem and glass canopy the extends across the side of the building into its new design.

Inside the building, the studio will convert the column-free interior spaces into large open-plan gallery and exhibition spaces with five-metre-high ceilings.

An accessible rooftop garden will be built across the top of the building.

Scheduled to open in 2024, the art museum is being designed to become a new cultural hub. It forms part of ongoing plans to reinvigorate the area and establish Jersey City as an art and cultural destination.

The Center Pompidou Jersey City will host exhibitions, cultural programmes and performances, as well as housing retail spaces and cafes. 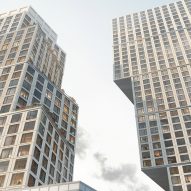 "When the Pathside building was slated for high-rise development, we saw a unique opportunity to change its trajectory to better serve the city as a museum and community center," said Jersey City mayor Steven Fulop.

"This is the latest major step towards our broader revitalization goals, utilizing all our city has to offer and establishing Journal Square as a cultural destination for generations to come."

The Centre Pompidou has expanded outside of its iconic Paris location and has built outposts including the Shigeru Ban-designed Centre Pompidou-Metz in France, plus others in Málaga and Brussels.

Recently the organisation opened a Chinese outpost within the David Chipperfield-designed West Bund Museum in Shanghai.

The cultural institution will be closing its Renzo Piano and Richard Rogers-designed Paris building from 2023 to undergo major renovations.

Images are courtesy of OMA.