HomeForest, an app that uses smart devices to bring the restorative effects of nature into the home, has been named as the winner of the inaugural Davidson Prize.

The contest called for ideas for how the home can adapt in response to the rise of home-working, following the Covid-19 pandemic.

Selected for the £10,000 prize ahead of two other finalists, HomeForest explores how technology can be used to bring the wellbeing effects of biophilia into the home, particularly for people who are living in cities with limited access to green space.

It aims to recreate the experience of "forest bathing", a practice of walking in nature to restore mental wellbeing, known in Japan as "shinrin-yoku".

Their concept imagines a "digital toolkit" that works with mobile and connected home devices, mapping a user's home and their daily habits in order to create a digital twin of their living and working environment.

It then overlays sensory experiences "such as the call of birdsong, the smell of rain and projected imagery of a forest canopy" into the home, to create the feeling of a natural environment.

The system would integrate an air-quality monitor, ASMR-stimulating audio and gobo lighting, allowing it to follow both the natural rhythms of the day and the changing seasons.

"Inspired by research on the positive wellbeing benefits of biophilia and in particular the concept of forest bathing, HomeForest’s digital toolkit works with perception and sensory stimulation to conjure a sense of boundary-less nature in the home," said the project team.

Launched in 2020 by the Alan Davidson Foundation, the Davidson Prize is an annual award to explore different aspects of the home through the lens of design. It was set up on the wishes of its namesake, architectural visualisation pioneer Alan Davidson, before his death from motor neurone disease in 2018. 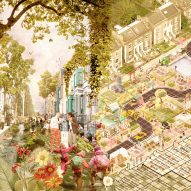 Brooks said the project was "like us playing music which feeds our soul".

"HomeForest brings a more immersive, sensory connection to nature which I find super interesting," she said.

According to Marie Chamillard, a representative for the Davidson Prize, the project would have resonated well with Davidson.

"He was an early adopter of all things digital, he loved trialling new things that would blend discreetly into his home and enhance the atmosphere. He would have absolutely used this," she added.