Skidmore, Owings & Merrill (SOM) is working with construction engineers TranSystems to revamp the station on Chicago's elevated train line, which is nicknamed the L.

The project is being undertaken by the City of Chicago, Chicago Department of Transportation (CDOT) and Chicago Transit Authority (CTA).

SOM's plans include a large undulating glass canopy that will cover the platforms and the new fly-over connection bridge that will be built over the road.

The canopy, which will be made from fritted glass to prevent bird strikes, will protect passengers from the elements as they board and disembark from the trains. 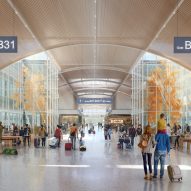 SOM said that the design of the canopy will reference important pieces of architecture in the city, including the John Hancock Center and the Willis Tower, two skyscrapers in Chicago also designed by the firm.

Elevators connecting the bridge to street level will make the station more accessible to users. The lifts will connect to a new bridge clad in glass and metal that will be built at the western end of the station.

Train platforms will be made wider and the pavements will also be widened at street level to make the station safer for passengers transiting to pedestrian or bus routes through the city.

The design of the State/Lake Station will also preserve sightlines of the nearby Chicago Theatre and other buildings along State Street.

"The new State/Lake station will be a gateway to downtown for Chicagoans and visitors alike," said SOM design partner Scott Duncan.

"As one of the most visible stations in the CTA network, the design is reflective of both its location and the needs of riders, with a soaring glass canopy, comfortable spaces for passengers, and fully integrated accessible design for riders of all mobility levels."

Founded in 1939, SOM has offices all around the world. Recent transit projects from the practice include the Daniel Patrick Moynihan Train Hall in New York and a pair of concourse terminals for the major Chicago O'Hare Airport expansion.