Architecture studio SOM has converted the Beaux-Arts James A Farley Post Office in New York into the Daniel Patrick Moynihan Train Hall as part of the renovation of Penn Station.

The 486,000-square-foot development increases the total concourse space at the largely underground Pennsylvania Station, which is New York's main inter-city interchange and the busiest station in the Western Hemisphere, by 50 per cent.

The expansion of the station occupies the James A Farley Post Office, which was built in 1913 by McKim, Mead & White – the studio that also designed the original Pennsylvania Station.

With its rejuvenation SOM aimed to capture the grandeur of the original above-ground station building that was known for its generous public spaces. The building's demolition in 1963 caused an international outcry and prompted the development of New York's architectural preservation movement.

"This is an incredibly important moment in the history of New York City," said SOM partner Colin Koop.

"We've designed a place that evokes the majesty of the original Penn Station, all while serving as a practical solution to the issues that commuters in, to and from New York have endured for too long," he continued.

"By connecting to our architectural past through the adaptive reuse of the Farley Post Office building, we are breathing new life into New York, and recreating an experience no one has had here in decades."

Built alongside the original station, the post office building stands directly above the railroad tracks. The Daniel Patrick Moynihan Train Hall now provides access to nine platforms that are used by the Long Island Railroad and Amtrak. 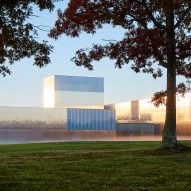 It is arranged around a light-filled atrium, which was the post office's original sorting room and had been enclosed since the second world war.

"One of the most remarkable things about this project is the way that it transforms an under-utilized and under-appreciated building into a new, inviting front door for this city," said Roger Duffy, the retired SOM design partner who led the design of the project.

"The train hall is at the core of this transformation. It is designed with lightness and warmth, which combine to reestablish the essence of what it means to come to New York."

The atrium is topped with a vaulted glass structure that was designed by SOM in collaboration with structural engineering firm Schlaich Bergermann Partner.

Four vaults that are each made from 500 glass and steel panels are supported on three massive steel trusses that supported the original roof in the internal courtyard.

Surrounding the main hall are facilities for Amtrak including ticketing and baggage areas, a waiting room and conference spaces as well as shops.

As part of the project, SOM designed a series of new entrances to the station including one on either side of the original grand stairs on 8th Avenue and additional entrances on 31st and 33rd Streets.

Overall SOM hopes that the project will provide a celebratory entrance to New York that captures the spirit of the original station.

"On a broader level, it is a new symbol of hope for the future," said the studio.

"Moynihan Train Hall re-establishes a civic icon for New York, recaptures the original spirit of train travel to Penn Station, creates a new gateway to the city, and celebrates one of the greatest cities in the world."

SOM, also known as Skidmore, Owings & Merrill, is one of the largest architecture studios in the USA. Recent projects by the studio include the National Museum of the United States Army in Virginia, FBI technology building in West Virginia and a courthouse in Los Angeles with pleated glass walls.

Photography is by Lucas Blair Simpson unless stated. All photos courtesy of SOM.