AMO – the research arm of the architecture studio OMA – designed a tunnel runway as well as red installations on a beach in Sardinia for a film showcasing the Italian brand's menswear collection.

The twisting red tunnel acted as a runway for the models, who wore designs from Prada's latest collection.

On exiting it, the models walked across several red squares that were used to create stepping stones across the sand. These also formed islands in the ocean that the models could sit on.

Giulio Margheri, the project architect at AMO told Dezeen that he wanted the show to be a "return to a world without constrictions, represented by an infinite coastal landscape."

"The 'utopia of normality' is reflected in memories of familiar seaside installations, conceived as bare elements that enigmatically dialogue with the pristine surroundings," Margheri said.

The first half of the show was filmed at Fondazione Prada in Milan, the OMA-designed exhibition space where the brand typically presents its collections.

The second half of the fashion show, which saw models lounging in the Mediterranean Sea, was filmed on a beach in Sardinia. 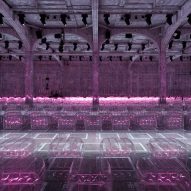 The decision to place a bright red tunnel in the middle of the natural beach landscape was supposed to create "a surreal encounter with nature".

"The Sardinian beach landscape introduces a calm and captivating rhythm in the display of the architectural elements, emphasized by the movements of the camera," Margheri explained.

Both the tunnel and the installations are made from treated wood. The "powerful" red colour was selected as it symbolizes "energy and confidence".

According to the architect, "this generates friction in the landscape and results in a new yet familiar environment", capturing the theme of the collection.

The collection was digitally streamed to audiences on 20 June and viewers can also watch a virtual tour that takes you into the tunnel and through each look.

AMO always designs sets for Prada shows, thanks to the close relationship between founders Miuccia Prada and Rem Koolhaas.

The studio has completed multiple designs for the brand, including a series of faux-fur covered geometric rooms for its Spring Summer 2019 menswear show and a neon blue runway for its 2020 Spring/Summer menswear show in Shanghai.