Why haven't architects joined the Race to Zero? The answer will surprise you.

The Dezeen article "Architecture 'one of the least well-represented businesses' in UN's net-zero push" unfairly presented architects and top firms in a negative light – as "dragging their heels" and lacking real ambition in addressing climate change.

According to Nigel Topping, the UN's climate champion, architects are failing to engage with the UN's drive to reduce carbon emissions as none of the 50 largest firms have signed up to its Race to Zero campaign, the United Nations initiative to get companies to commit to achieving net-zero emissions by 2050.

Nigel is disingenuous for the following reasons.

First, the Race to Zero – achieving net-zero emissions by or before 2050 – is neither highly ambitious nor providing the leadership needed at this critical time.

A good probability of limiting warming to 1.5 degrees Celsius equates to CO2 emissions reductions of 65 per cent by 2030, and zero by 2040, not by 2050 as stated in the Race to Zero and illustrated in the following graphic:

Net-zero emissions by 2050 means giving up on limiting planetary warming to 1.5 degrees Celsius as set out in the 2105 Paris Agreement on the climate.

Second, over 900 architecture, engineering, and planning (AEP) firms, and all top 50 US firms, have been participating in the American Institute of Architects' 2030 Commitment, working toward carbon-neutral new buildings and major renovations by 2030, with annual reporting to the AIA on firm progress.

The AIA will soon add the targets, metrics, and reporting for whole building embodied carbon as well. And just this past week, with time running short, Architecture 2030 called on architects worldwide to move up the date for the 2030 Challenge carbon-neutral target from 2030 to 2021.

And finally, at the COP26 climate conference in November, we will deliver a 1.5 degrees Celsius Communiqué to all country delegations from the AEP firms and organizations responsible for designing and developing a major portion of the built environment worldwide. The Communiqué will show that our industry is actively working to meet the Paris Agreement's 1.5 degrees Celsius carbon budget and will ask the countries to do the same. 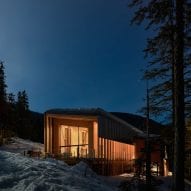 To date and growing, the 1.5 degrees Celsius Communiqué signatories (by invitation) include the 96,000-member AIA; the AIA Large Firms Roundtable consisting of the top 60 AEP firms; many of the top 250 AEP firms worldwide; large professional industry organizations representing China’s key Local Design Institutes, the International Union of Architects, the International Federation of Landscape Architects and Green Building Councils among many others.

US building sector has not increased its energy consumption since 2005

At COP26 we will also demonstrate industry-wide climate change success stories. For example, the US building sector has not increased its energy consumption since 2005 even though we have added over 50 billion square feet (4.7 billion square metres) to our building stock and today CO2 emissions in the entire sector continue to decline and are down 30 per cent from 2005 levels.

With the Biden administration's goal of carbon-free electricity by 2035, the building sector's C02 emissions will be over 70 per cent below 2005 levels by 2030.

Contrary to the Dezeen article’s assertions, the AEP community is committed to acting decisively to meet the 1.5 degrees Celsius carbon budget and at COP26 we will illustrate that it is feasible and environmentally and economically advantageous to do so.

The portrait photograph is by Jamey Stillings.

Edward Mazria FAIA is founder and CEO of the nonprofit Architecture 2030 and is an internationally recognized architect, author, researcher and educator. Over the past four decades, his research into the sustainability, resilience, energy consumption and greenhouse gas emissions of the built environment has helped redefine the role of architecture, planning, design, and building in reshaping our world. He was awarded the 2021 AIA Gold Medal for his "unwavering voice and leadership" in the fight against climate change.

Carbon revolutionThis article is part of Dezeen's carbon revolution series, which explores how this miracle material could be removed from the atmosphere and put to use on earth. Read all the content at: www.dezeen.com/carbonThe sky photograph used in the carbon revolution graphic is by Taylor van Riper via Unsplash.
Read more: