Construction in Sweden could grind to a halt after the country's biggest cement factory was stripped of its licence to mine limestone on environmental grounds.

The ruling by the Swedish Supreme Land and Environmental Court last week means that the Cementa plant at Slite in Gotland could be forced to end production on 1 November.

Matilda Hoffstedt, manager of the plant, said the ruling would create "a crisis situation for Swedish cement supply" while Cementa said work on Foster + Partners' Slussen masterplan in Stockholm (top image) could be impacted.

"It is wonderful that the court chooses to comply with the environmental laws we have, not to aggravate the species crisis and that incomplete environmental impact assessments are not accepted," Schlyter told Swedish news organisation Dagens PS.

The plant produces around three-quarters of all the cement used in Sweden. It is also the second-largest source of greenhouse gas emissions in the country, responsible for three per cent of all CO2 emissions.

The court ruling overturns an earlier decision by a lower court to grant the factory a licence to continue mining limestone, an essential ingredient in cement, for another 20 years.

"They tossed out their application to keep on mining limestone," said Daniel Jacobs, a journalist working at Dagens PS. "Now the construction industry is saying they're not going to be able to build anything in Sweden."

The licence was refused due to concerns over the impact on groundwater in the environmental assessment the factory had submitted. Greenpeace has also accused the plant of using its kilns to incinerate toxic waste without a permit.

Cementa, which is owned by giant German producer HeidelbergCement, said the decision would jeopardise construction projects in Sweden including major projects including the Slussen and Förbifart infrastructure projects in Stockholm and the Västlänken tunnel in Gothenburg.

“A renewed mining permit in Slite is a prerequisite for a long-term cement supply in Sweden, including for large construction and infrastructure projects such as Slussen, Förbifart Stockholm and Västlänken," the company said. 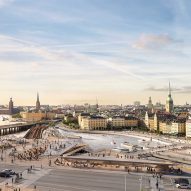 Cement production is responsible for an estimated eight per cent of global carbon emissions. The emissions are largely due to the way that limestone, which is the main ingredient in cement, is processed.

Several companies are investigating ways of producing emissions-free concrete that does not require traditional cement including Carbicrete, which has developed a way of using industrial slag instead of cement as a binding agent.