The operator of the BIG-designed Copenhill ski slope has denied that it will need to close, following reports in the Danish press that it may be forced to shut permanently due to the deterioration of its skiing surface.

The Copenhill operator hit back at the claims in Danish newspaper The Copenhagen Post that the ski slope, which tops the Amager Bakke power station, could be forced to temporarily or permanently close.

"Surface wears out faster than expected"

In a statement published on its website titled Facts about the ski surface on Amager Bakke it acknowledged that the surface is deteriorating more quickly than expected, but disputed the claim that the facility was under threat.

"Yes, we experience that the steep part of the ski slope's surface wears out faster than expected and therefore parts of the surface must be replaced," the statement said.

According to the operators, the repairs will be made while the slope is kept open.

"When the ski base needs to be replaced, it is done in smaller areas at a time. It will therefore not go beyond opening hours and you will continue to be able to ski in the areas that are not in the process of being replaced."

According to The Copenhagen Post, the repairs to the 400-metre-long slope, which opened in 2019, will cost 9.5 million kroner ($1.5 million) and could require temporary closure of the leisure facility.

The paper also reported that a dispute between the facility's owner Amager Bakke Foundation and its insurance company Tryg over who is liable for the repairs could lead to the slope's permanent closure.

"The stakes are high: if the foundation wins the case or a settlement is reached, the ski slope can reopen in 2024, but if it loses the case, the facility must close permanently," reported The Copenhagen Post.

"Another potential spanner-in-the-works is the risk that temporary closure may lead to claims from the operator Copenhill for lost earnings."

Designed by BIG, the Amager Bakke waste-to-energy power plant is capable of converting 440,000 tons of waste into energy annually.

Along with the ski slope, it is also topped with a climbing wall and several hiking trails. According to BIG founder Bjarke Ingels, the facility is an example of "hedonistic sustainability".

"CopenHill is a blatant architectural expression of something that would otherwise have remained invisible: that it is the cleanest waste-to-energy power plant in the world," he said at the time of its opening. 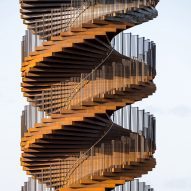 "As a power plant, CopenHill is so clean that we have been able to turn its building mass into the bedrock of the social life of the city – its facade is climbable, its roof is hikeable and its slopes are skiable" he continued.

"A crystal clear example of hedonistic sustainability – that a sustainable city is not only better for the environment – it is also more enjoyable for the lives of its citizens."

BIG, which was founded by Ingels in 2005, is one of the world's best-known architecture studios. Recent designs by the studio include a 3D-printed structure designed to simulate living on Mars and a battery-metals plant for an underseas mining company.