American artist Laura Owens has covered the walls of an exhibition of Vincent van Gogh's works in colourful handmade wallpaper.

Currently on show at Fondation Vincent van Gogh Arles, the exhibition Laura Owens and Vincent Van Gogh explores the relationship between the seminal artist and the contemporary painter.

Seven of Van Gogh's paintings, which have been loaned from museums and galleries around the world, are exhibited on walls covered in Owens' distinctive wallpaper.

A selection of Owen's own artworks are also on show.

To make the wallpaper, the American artist used pastels and watercolours to paint colourful patterns onto a giant sheet of handmade wallpaper.

"Parts of the wallpaper have over fifty layers of silk-screening; some of the paints include iridescent pigments whose colours shift under different lights," said Owens.

"The wall becomes an intoxicating, refreshing means of conquering the space of an exhibition and charting surprising new mental territory."

The resulting design is almost tactile, and features lots of geometric shapes, swirling patterns and elements of nature such as flowers, shells and trees.

At the same time, the wallpaper is meant to recall the decadent, silk-covered walls found in historical chambers of palaces and castles. 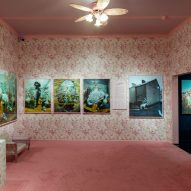 Owens drew on the work of van Gogh as well as the English artist and designer Winifred How to inform the wallpaper design.

For the exhibition, she conducted detailed research into the provenance of each of the Van Gogh paintings on show. She also spent most of 2020 living in and around Arles, where she was able to research the history of the city and Van Gogh's experience there.

According to Owens, the juxtaposition between the two artists' works "creates an environment suspended between the pre-modern and the contemporary".

"The spaces on this level evoke not just the wallpapered interiors that Van Gogh knew from his time in Arles, but equally the world of scanners, Photoshop and digital printing," she said.

Other exhibitions that make use of strong set design include Fashion from Nature by Studio 10. The Chinese design firm used translucent materials and winding ramps to create a series of abstract spaces to display artefacts.

OMA's New York office created a site-specific backdrop for the House of Dior exhibition Dior: From Paris to the World. Each section of the exhibition space was designed to reflect the garments on display there.

Laura Owens and Vincent van Gogh will be on show at the Fondation Vincent van Gogh Arles until 31 October 2021. See Dezeen Events Guide for an up-to-date list of architecture and design events taking place around the world.