Architecture office Studio Bua has converted an abandoned farm building in Iceland into an artist's studio and residence, featuring a new gabled volume slotted inside the existing walls.

Studio Bua, which has offices in London and Oslo, was asked to develop a proposal for revitalising a cluster of former farm buildings overlooking the Breiðafjörður Nature Reserve in western Iceland.

"Our first proposal was to link the existing spaces to create a more cohesive landscape with a 'community' of buildings for the family and their friends to occupy," said Studio Bua. "Together they create the place and make its history evident."

The first phase of the project involved converting the derelict concrete barn into an artist's studio and holiday home for the owners.

The existing barn's robust concrete structure was retained and adapted to accommodate a kitchen and dining area alongside a double-height studio space.

Additional single-storey walls adjoining the main structure had been constructed without foundations and were therefore deemed too fragile to reuse. Instead, they are left as they were found, forming a perimeter around an open courtyard.

The ground floor is designed to provide a sequence of utilitarian spaces with good natural light and views of the surrounding landscape through new and existing openings.

"On the ground floor in the original concrete structure we made openings only where it was necessary, mostly because the walls are not reinforced and opening further would compromise the structure," the architects explained.

"We added two new openings because we needed to let more light into the kitchen and to add an entrance to the studio, to get in large artworks."

The ground-floor spaces feature a palette of simple and practical materials including an exposed concrete floor and surfaces covered with stained birch plywood.

The architects collaborated with the client, who had previously used stained plywood in her practice, to develop pigments that would evoke colours found in the surrounding countryside.

A timber-framed structure added above the existing ground floor contains the building's more domestic spaces, including a small sitting room, two double bedrooms and a bathroom.

The extension's gabled form mirrors the profile of the original concrete structure, while its homogenous, corrugated-metal cladding distinguishes it as a new addition.

A staircase positioned in one corner of the building ascends to the sitting room, which is lined with a row of windows looking out across the beach and the fjord beyond. 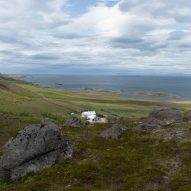 This mezzanine space overlooks the dining area below, which is flanked by a large opening in the original gable that once allowed hay to be hoisted into the barn.

Various reclaimed materials are used throughout the project, including plywood handrails on the first floor made using offcuts from the ground-floor cladding.

Outdoor furniture was produced using concrete salvaged from the new openings created in the existing walls, while all the internal doors, as well as the bathroom sink, were sourced from a recycling centre in Reykjavik.

Studio Bua was founded in 2017 by Mark Smyth, Sigrún Sumarliðadóttir and Giambattista Zaccariotto.

The studio's name derives from the Icelandic word for "inhabit" and its architectural approach focuses on elevating everyday spaces through a combination of craftsmanship, technology and a hands-on approach to design and construction. The team also renovated a guesthouse in the same part of Iceland as the holiday home.

The photography is by Marino Thorlacius.