A new corrugated metal skin is one of several changes that Studio Bua made in its renovation of Guesthouse Nýp in Iceland.

Guesthouse Nýp is located on Iceland's west coast, within the Breiðafjörður Nature Reserve. It is predominantly a bed and breakfast, but also serves as a cultural hub, hosting exhibitions, workshops and other events.

Studio Bua has not only given the building a facelift, but also added extended it to create space for extra facilities. The idea was to make it easier for the owners to put on events without disturbing overnight guests.

The building was originally built in 1936 to serve as the residence of a sheep farm. It was largely rebuilt in 2001 and has been used as a cultural venue since 2006.

The structure was made up of two blocks – the two-storey, gabled farmhouse and a single-storey, flat-roofed extension that was once used as a barn. Studio Bua has extended this barn, giving it a pitched roof more in keeping with the local vernacular.

Both buildings are also re-clad with corrugated metal panels, made from an aluminium and zinc alloy. These panels cover the walls and the roofs, helping to unify the different elements of the structure.

"[We] took a vernacular approach with a form based on local turf homes and a gradual renovation that focused on restoring and reinterpreting historical features while making full use of local labour, techniques and materials such as stone-turf retaining walls and tiles handmade from local clay," explained Studio Bua.

"Since the end of the 19th century, the combination of timber frame and corrugated metal cladding has been widespread throughout Iceland, replacing the traditional turf house," it continued.

"The prevailing wind comes down the valley from the north and east, and so it was decided to over-clad the rear of the building and the new extension in corrugated aluzinc – one of the few materials proven to withstand the extreme weather."

Inside, the barn building now contains a multi-purpose events space. It is supported by columns made from driftwood, which was sourced from a nearby beach, and has windows with views of the ocean. 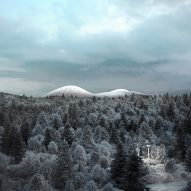 The extension also creates three new guest suites, in addition to the four in the main house. Features in these rooms include wood panelling, exposed concrete and nature-inspired artworks.

To keep the project to its strict budget, the design team used as many recycled elements as possible. Handrails and doors were all second-hand, found in building sites around Reykjavík.

"The site team was made up of local builders and craftsmen including the neighbouring farmer, who happened to own a cement truck," said Studio Bua.

With offices in London and Oslo, Studio Bua is led by architects Mark Smyth, Sigrún Sumarliðadóttir and Giambattista Zaccariotto. The team is also currently working on another renovation project nearby – covering a barn into a home and studio for an artist.

Photography is by Giovanni De Roia.