The apartment is located at the base of a typical Athenian polykatoikia – a concrete residential block with tiered balconies – in the suburban neighbourhood of Ilioupoli.

Daylight only penetrates into the sunken, 56-square-metre space from above on one side, giving it a "magical cave-like" feeling that Point Supreme wanted to retain.

"It's very appropriate and pleasant given the warm weather and strong sun in Athens during most of the year," said founders Konstantinos Pantazis and Mariana Rentzou.

"The goal of the renovation became to strengthen this feeling."

Key features of the space such as the steel windows and doors as well as the raw concrete surfaces of columns, beams and ceilings were retained.

An existing small toilet was extended to make space for a shower. But apart from this, no internal walls were added in order to make the space feel as large as possible.

Instead, floor finishes, furniture, sliding partitions, hanging shelves and curtains were used to separate the apartment into different zones.

"These create the illusion of depth," said the studio.

"Coupled with different details and aesthetic choices, they create an especially pleasant and rich visual result." 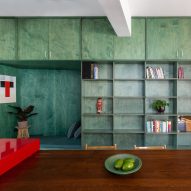 Point Supreme chose a tactile, warm-hued material palette to enhance the cavernous feeling of the apartment, from a timber screen with built-in bench seating at the apartment's entrance to cork panelling and a sliding Corten-steel partition in the bedroom.

In the kitchen, custom-made red Formica and melamine cabinetry with plywood countertops sit alongside a rust-coloured table and the owners' vintage chairs.

The glazed Cotto tiles covering the floor of the main space were salvaged from storage. These kinds of ceramic tiles were popular in the 1970s, the studio said, when they were used to cover verandas and porticos in holiday homes throughout Greece.

In the apartment, they complement the rough texture of the raw concrete while adding a sense of warmth.

Blue is used as an accent colour on a curtain, a strip of floor tiles at the entrance to the bedroom and across all surfaces in the bathroom, where it creates the impression of being submerged underwater.

Point Supreme used a similar zoning strategy when refurbishing another apartment in Athens with a green-stained plywood storage wall.

Photography is by Yiannis Hadjiaslanis and Point Supreme.