Architecture office VATRAA has reused bricks salvaged from the demolition of an existing sidewall to construct this extension to a Victorian house in north London.

The owners of the house in the borough of Camden had lived in the property for 15 years before asking VATRAA to design a rear extension housing a new kitchen and dining area.

The project's main objective was to introduce a functional and contemporary addition that respects the original features of the Victorian house.

An existing sidewall extension was demolished to create space for the 16-square-metre wraparound structure, which uses the salvaged bricks to create a vertical pattern on the new facade.

"We required the contractor to undertake the demolition with care in order to reclaim all bricks from the side and rear walls, which were then used to build the extension," architect Bogdan Rusu told Dezeen.

The matching bricks help the new addition to complement the existing facade, while the extension's pitched roof references a section of the original building's roofline.

The new volume is angled to face the most attractive portion of the garden and to allow for a side door providing everyday access to outside.

The project brief called for an "all-white" interior with accents of colour, so VATRAA incorporated a circular blue window at the centre of the gabled facade.

"The round window with its blue stained glass is the only colour insertion," Rusu pointed out. "By matching the colour of the other stained glass windows found in the original building, it brings energy into the space while reconnecting the new and the old." 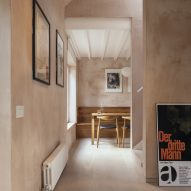 The interior features a pared-back palette, combining whitewashed brick with other light materials that contribute to the bright and spacious feel.

"While respecting the white palette, we played with different textures and patterns," Rusu added, "including hexagonal tiles, rectangular bricks and cellular beams that bring character and react in the presence of natural light."

The steel cellular beams are used to help separate the new extension from the original building, both structurally and visually.

The circular holes in the beams also allow light to penetrate and lend the space a distinct identity.

VATRAA was founded in 2018 by Anamaria Pircu and Bogdan Rusu. The studio focuses on using a project's constraints as a catalyst for creative problem-solving, resulting in characterful buildings that are tailored to their users' requirements.

Longlisted for emerging architecture studio of the year at the Dezeen Awards 2021, VATRAA's previous projects include an award-winning London council house renovation featuring pink-toned plaster walls and an oversized window.