Italian fashion brand Sunnei has renovated the interior of an ex-recording studio to create a minimalist headquarters as a canvas for furniture and art pieces by the brand's collaborators.

Located near its flagship store in Milan, the brand named its headquarters and studio Palazzina Sunnei to reference typical Milanese residential buildings.

Palazzina Sunnei was organised as a series of multi-functional "livable spaces".

It houses a photo studio, showroom, archive and meeting rooms along with office space for Sunnei's team.

When the fashion brand first moved into its new headquarters in 2020 it occupied a single building titled Palazzina 1.

More recently, the brand expanded into an adjoining building, aptly titled Palazzina 2, which has interiors designed by Milan-based Studio Mare.

The addition to the headquarters was designed by Studio Mare and occupies three neighbouring floors totalling an additional 400 square metres of space.

The interiors of the headquarters have a minimal palette and are populated by artworks, objects and furniture by friends and collaborators of the brand.

"We asked some of our artist friends to create some pieces just for us to fill the blank areas," Sunnei founders Loris Messina and Simone Rizzo told Dezeen.

"These items are never invasive, rather they offer a nice surprise while wandering the building."

Insulating, soundproofing ceiling panels from the building's former use cover the ceilings of rooms and were incorporated throughout the design of Palazzina 1.

Walls were painted white and fitted with white-painted cork panels that can be used as pinboards for the team's ideas.

Hard materials, including concrete, polished stone and terrazzo, cover the floors and juxtapose with the building's original function as a recording studio.

"We also wanted to turn the whole office into a whiteboard and so we did," said Messina and Rizzo.

"All of the internal walls on each floor are coated by cork panels which allow us to experiment, paste our thoughts and ideas onto it to help us better visualize what we are doing."

Much like Sunnei's bold and bright direction, the brand inserted unexpected and sculptural pieces throughout the building.

The basement level of the headquarters houses the brand's showroom, meeting rooms and a courtyard. In the showroom, a wall of Funktion-One speakers occupy the rear of the space and serve as a backdrop for a collection of off-white Superonda sofas by Archizoom for Poltronova. 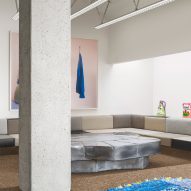 Custom made outdoor furniture was crafted Milan-based NM3 from laser-cut stainless steel sheets and reflect the courtyard and surrounding trees from its polished surfaces.

"The magic happens in the garden, where the furniture is designed by Milan based collective NM3 and pieces by Ben Orkin," said Messina and Rizzo.

An elevator, which runs through the core of the building, connects Palazzina 1 and 2 via doors that open on both sides forming a moving corridor between the two spaces.

"We have big, made to measure, square desks and ergonomic chairs...while our creative office has a piece by Sam Stewart, Bambole couches by Bellini for B&B and a table by Bloc Studios," said Messina and Rizzo.

"We made a point to create a lot of communal spaces where they can mingle and bond and take some time to decompress."

On the upper floors, a custom-built modular metal kitchen unit by Very Simple Kitchen zones a small canteen. In the canteen is a large chipboard table surrounded by stools by Visibility for Matter Made.

Adjoined to the canteen-style space, are the building's e-commerce, social media, PR and photo studios and are similarly scattered with sculptures including pistachio green pieces by Alton Alvarez.

"We hope people will use the space as if it was their own home. Yes, this is an office and being here is not always the most fun but we hope being surrounded by beautiful decor will motivate our team," said the founders.

"We also love to invite our friends to come and chill, drink a glass of wine. We want people to feel great when they visit us. It goes from everybody, from suppliers to press and collaborators."

In 2019, Ance Studio's relocated its headquarters to a 1970s brutalist-style building in Sweden, which was filled with artwork and furniture in an effort to create a fashion-school atmosphere.

Fashion brand MSGM also moved its offices to a building that was home to a former blacksmith's workshop.