The set designs for Netflix's hit show Squid Game, which were informed by everything from MC Escher engravings to real children's playgrounds, were designed "to look cute and sweet" according to the show's director and art director.

Set in modern-day South Korea, Squid Game depicts a contest that pits down-on-their-luck citizens against each other in a series of deadly children's games, which take place in a hidden arena on a forested island.

Here, the contestants compete to the death in six classic kids' games – including Tug of War and a version of Red Light, Green Light featuring a giant animatronic doll – to win a final prize of 45.6 billion won (£28.1 million).

Many of the gaming arenas, which were built from scratch with sparing use of CGI, were designed as oversized versions of real playgrounds to make the actors experience the spaces as if they were small children, according to the show's director Hwang Dong-Hyuk.

"I tried to simulate the atmosphere of real playgrounds," said Hwang in a Netflix interview.

"I thought those kinds of sets can give more of a sense of reality to the actors' performance."

A more elaborate set was created for the fourth game, called Marbles, which takes place in a recreation of a traditional Korean neighbourhood.

"We put the most effort into that set," said art director Chae Kyoung-Sun. "It took so much time – our main concern was how to display the sunset. We thought it should be a set on the border of fake and real."

The set design for the show was carefully calculated to evoke feelings in the actors that would translate to their performances, Hwang said.

A glass bridge used for the fifth game was made from real glass and, although it wasn't set above an abyss like in the show, the actors behaved as if it was.

"A mere 1.5 metres can make you frightened," said Hwang. "The glass made them nervous. I think we could express the unnoticed rigidity and fear of the body."

"It felt like really jumping off a high bridge, the game was real and they felt real fear," he added. "We think that set had the power of realism." 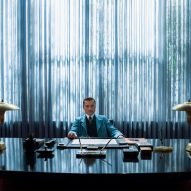 Squid Game's set design is neatly tied together at the end of the show, with the final game taking place on the same set as the very first one. This was a deliberate choice by art director Chae.

"The first and last game are played in the same spot," she said. "We focused on the place's fairytale-like, somewhat uncanny feelings. That's how we finished the last game."

As well as the elaborate sets used for the gaming arenas themselves, art director Chae created the areas where the players live while waiting for the games.

She also designed a surrealist, maze-like staircase that they travel up and down to get to them, which is painted in playful pastel yellow and pink hues.

The staircase evokes the designs of Spanish architect Ricardo Bofill, as well as the trompe l'oeuil levels in video game Monument Valley, but was actually informed by artist MC Escher's engravings.

The colourful designs of the sets were chosen as a contrast to the way these kinds of games would normally have been depicted.

Instead, he and Chae aimed to make the sets "look cute and sweet, as a place to trigger nostalgia."

In contrast, the contestants' living area – a vast space filled with bunk beds – was designed to have the feel of a warehouse.

"Since modern society is constant competition to climb the ladder, we thought about portraying that in the bed design," Chae said in an interview with Netflix Korea. "We needed an impactful object so we took the ladder form."

"Rather than treating them like people, [Chae] suggested the contestants be presented like objects, piled on the warehouse shelves," added director Hwang.

Since it launched in September, Squid Game has become Netflix' biggest-ever hit, and has been screened by 111 million viewers globally.

Photography is courtesy of Netflix.