Called State of the World, the sculptures were presented at an exhibition at Design Miami/Basel.

Each solid sculpture represents one individual country. The country's birthrate, life expectancy and history are reflected in the shape of the sculpture, with each individual groove representing an age from 1-100.

At the base is newborn children, while the peak represents the elderly. Most of the sculptures are bottom-heavy, demonstrating how few people in society live to be 100 years old.

"The idea was to make visible and to also understand all the people who are living right now on the same planet," Lehanneur told Dezeen.

"I wanted to change the two-dimensional statistics into a three-dimensional object – like a spinning object," he said. "You can see that every single silhouette is different from one another."

Lehanneur retrieved the population data from a United Nations (UN) database, where it was originally depicted in mathematical graphs.

In order to accurately represent each age demographic to the half millimetre, he 3D-printed the sculptures from aluminium. 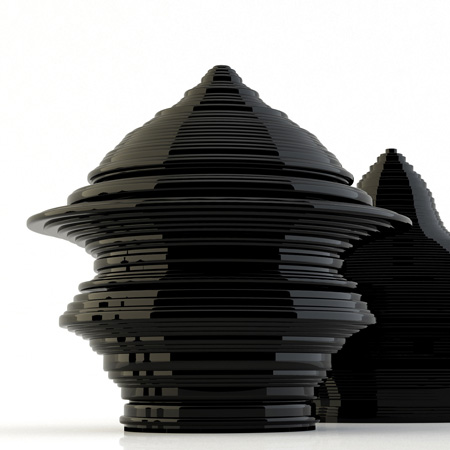 Age of the World by Mathieu Lehanneur

"I decided to use the aluminium because when you mash it in carefully, you can absolutely respect every single dimension," he said.

"For me, it makes sense to be extremely precise because every single millimetre means thousands of years."

Lehanneur also created a silver sculpture that represents the population data for all of Earth, which is much wider at its base than its top, showing how young the majority of the planet's population is.

State of the World is the continuation of an earlier series of sculptures by the designer, called The Age of the World, created in 2009.

That project, a collection of ceramic urns, represented the ages of the population in France, the USA, Japan, Egypt and Russia.

Although he started the project a decade ago, Lehanneur believes that 2021 was the right year to finalise and exhibit State of the World because of the coronavirus pandemic.

"This is a turning point in the history of humanity," he reflected. "It's super rare that the entire world basically lived the same catastrophe."

"This moment of the reopening of the world was the right moment," he added.

Lehanneur is known for artwork that explores the relationship between the living world and objects, such as a black marble table that looks like the sea.

The artist also created a range of black marble furniture sculptures that mimic waves in the ocean.