Architecture offices Palma and Hanghar have inserted a "playful sequence of rooms" made from thermal clay bricks into an empty passageway that leads to a monumental chimney in Logroño, Spain.

Called Types of Spaces, the project was a temporary installation commissioned as part of last month's Concéntrico design and architecture festival in the city of Logroño in northern Spain's La Rioja province.

Mexico City practice Palma collaborated with Spanish firm Hanghar to create Types of Spaces, which was located within an unused public passageway that leads to the site of Fábrica de Tabacos, an old tobacco factory.

The installation comprised a series of geometric open-air spaces built from naturally terracotta-coloured thermal clay bricks, which the designers described as "an ephemeral and playful sequence of rooms."

Arranged on a surface of discarded brick chips, the "rooms" provided an immersive gateway to a similarly-coloured red brick chimney that is located at the end of the passageway.

"When we were invited to participate in the festival, we were presented with several possible locations across the whole city to choose from," Palma architect Diego Escamilla told Dezeen.

"The passageway wasn’t even presented in the first meetings by the organisers because they thought we might not be really interested in it," Escamilla added.

"In the end, it was the perfect site for us. A discreet part of the city that could easily go unnoticed at first, but could awaken the curiosity of visitors and invite them to go through it."

While the chimney is a remaining symbol of Fábrica de Tabacos, the factory is no longer in use. Today, its site is split between the Regional Parliament of La Rioja and a public library.

"The project took inspiration from both the site and the material we built it from," explained Palma architect Ilse Cárdenas. 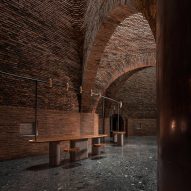 "The starting point for the design was to divide the long passage into a series of concatenated 3.6-metre square rooms in order to form a spatial procession of corridors and rooms of a domestic character in an attempt to reconstruct the void of the passage," added Hanghar architect Eduardo Mediero.

Using 30-by-30-centimetre bricks, the architects say that they took advantage of the bricks' interlocking system, only using minimal mortar reinforcement to secure them in place in order to ensure their reuse once the installation was dismantled.

Palma and Hanghar sourced the bricks from Cerámica Sampedro, a factory in Spain that accepted the bricks back after Concéntrico.

"Our main objective with the project was to not generate waste or trash by buying new materials, which usually happens with many ephemeral projects," said Cárdenas.

"With brick as the main element, we decided to not use anything else, and build the whole pavilion with it. We think it creates a really nice dialogue with the chimney," concluded Mediero.

Other recently designed playful installations include a colourful Lego laundrette constructed in London as a place for children to play by Yinka Ilori.

The photography is by Luis Díaz Díaz.

Types of Spaces was on show at Concéntrico design and architecture festival from 2 to 5 September 2021. See Dezeen Events Guide for an up-to-date list of architecture and design events taking place around the world.