Architecture studio Conran and Partners has moved its headquarters into an office in Clerkenwell, central London, that caters to the needs of post-pandemic working.

The British studio, which was founded by the late designer Terence Conran, transformed an existing two-storey workspace in a building on Great Sutton Street into its new workspace.

The studio's new location is close to a number of other design studios and architecture practices, as well as many of Conran and Partners' clients.

"The location of the studio was a key component in our decision making," Tim Bowder-Ridger, principal at Conran and Partners, told Dezeen.

"Not only did we want to make travelling in for our staff and clients as easy as possible, but Clerkenwell remains the heart of London's architecture and interior design community so the location allows us to come together with clients, colleagues and suppliers routinely, informally and creatively," Bowder-Ridger added.

Spread over the basement and the ground floor of the building, the office has an entrance on the street level.

An expansive "shop window" that overlooks the street allows employees to engage with the outside world and natural light to flood the lower floor.

The office's interior was designed to feel interconnected with the aim of promoting employee interaction across the space.

Connecting the two levels is a spiral staircase designed in collaboration with structural engineer Milk that wraps around existing raw concrete columns.

Upon arrival, employees enter an open reception area from where they can see from one end of the studio to the other, as well as down to the level below. 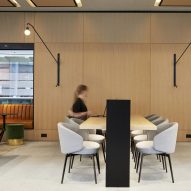 Black acoustic fabric has been stretched along the ceiling to absorb noise disturbance, whilst also disguising private or busy areas to create a "visually calm space".

"We have no cellular offices, and the meeting spaces are designed to be annexes of the main spaces and only closed off when necessary, via large fluted, semi-transparent glass or dark stained polar screens appearing out of the mirror screens and joinery units," said Bowder-Ridger.

Conran and Partners said its new office design is a response to the contemporary need for collaborative and flexible working styles.

"The pandemic has accelerated the blending of people's lifestyles, and our new studio has been designed to offer a contrast with working in isolation at home," said Bowder-Ridger.

"The crisis has accelerated the move away from nine to five, bland and mechanical working spaces and has accentuated the need to create desirable places to be in."

These woody tones contrast against dark-stained, poplar-ply wall panelling and joinery and black steel balustrades and handrails that have been used throughout the space.

In keeping with the need for a flexible workplace and the fact that many employees are also working from home, ten break-out spaces are dotted around the office.

These spaces aim to "enable intimacy when needed or preferred" and include a study, a library, a studio room and a small kitchen.

Other recent office redevelopments in the British capital include an office by ConForm Architects on the 11th floor of the recently refurbished Smithson Tower.