Design studio Local Projects has created an interactive exhibition space for the American Bible Society, which aims to present itself as a "beacon of light" along Philadelphia's Independence Mall.

Located along the three-block section of the city's Independence National Historical Park, the Faith and Liberty Discovery Center explores the impact the Bible has had on individuals throughout American history.

A helix-style sculpture, made up of three pillars, spirals up through the inside of the building and extends beyond the roof, making it visible from the exterior.

Lights illuminate the sculpture from below, emphasising its lattice-patterned surface. The studio describes it as a "beacon of light" that turns the building into a landmark.

New-York-based Local Projects wanted to create an entrance that felt bright, clean and spacious, which they achieved using expanses of glass and light-coloured materials.

In the lobby, three words are engraved into the floor around the twisting sculpture that represent the concept of the exhibition, and are intended as a nod to the area's history.

Visitors are given a glowing smart device called The Lamp at the start of the exhibition, which they use along the way to engage with the works and collect content that catches their eye.

These bookmarked exhibits can then be accessed after the visit via an online portal on the Faith and Liberty Discovery Center's website, allowing them to continue their learning.

As the designers explained, this illuminated device acts as a "core metaphor of the institution".

The entrance follows on to the Welcome gallery, which offers an audio-visual experience that prompts questions such as "What do you value?" and "What is faith?".

Leading on from this room is the Freedom of Faith gallery, which uses graphics, artefacts and film to explore the relationship between freedom and faith in America, including how beliefs influenced movements such as the revolution.

The subsequent Liberty gallery highlights the ways in which historical change-makers like Frederick Douglass and Soujourner Truth drew on biblical teachings when fighting for freedom.

The aim is to encourage visitors to reflect on times in their lives when their beliefs have led to positive actions.

Following this is the Justice gallery, which aims to impart "an understanding that the struggle to realize America's founding ideals is not linear or binary, and that conflicts over what is just are core to past and present struggles in America".

Biblically inspired music such as bluegrass and gospel is played throughout the Hope gallery, which contains various objects and artefacts that visitors can save to their digital collection via their Lamp. A domed structure is featured at the centre of the room.

Life-sized, digital totems display people offering messages of hope and sharing their stories of how faith has provided them with comfort in times of crisis.

Meanwhile, in the Unity gallery, visitors can see all of the exhibits they have selected using their Lamp, and can compare their collections with others'. 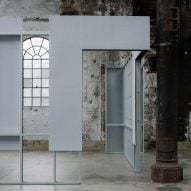 "No matter who visitors are, where they're from, or what they believe, we hope that visitors to the Faith and Liberty Discovery Center will find a piece of themselves in the story of America, from our founding through today," said Local Projects.

The studio's exhibition design for the Faith and Liberty Discovery Center has been shortlisted in this year's Dezeen Awards.

Other shortlisted projects in the exhibition design category include a site-responsive temporary exhibition for Sydney's historic Carriageworks at Eveleigh, and the V&A museum's gallery at the Fumihiko Maki-designed Sea World Culture and Arts Center in Shenzhen.