Design Academy Eindhoven graduate Bruno Baietto hopes to highlight the role of bread as a symbol of class, politics and religion, by using it to shape blown glass.

Baietto has created a series of coloured vases blown inside bread loaves, plus various other ceramic and porcelain objects that commemorate the bread-making process.

The project, titled Follow the Crumbs That Fall From Your Own, explores the symbolism of bread in different social constructs across history.

"Under socialism, bread is a synonym of labour and national progress," said Baietto, "while under capitalism it is a staple food and the result of a large economy."

"It's also a symbol of Christianity, as a gift of god and the body of Christ," he told Dezeen.

For Baietto, bread is also part of his family history. He grew up in Montevideo, Uruguay, in a family of bakers with political ties in both Brazil and Uruguay.

"So it was a natural decision to explore the symbolism of bread and its production to address the leftovers of my own ideological background," he said.

The process itself is fairly straightforward. 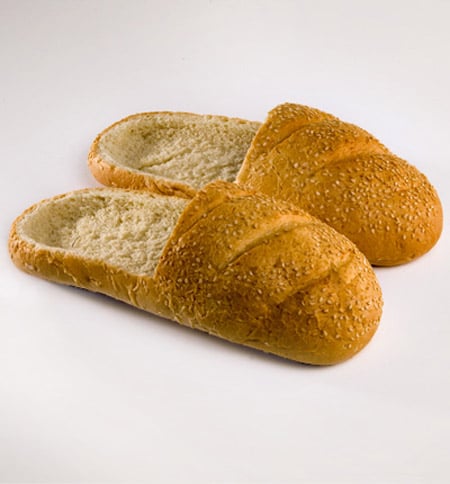 The molten glass is inserted into a hollowed out loaf before being blown.

The bread burns away and eventually breaks off, leaving a glass vessel with a unique texture.

The main challenge, according to Baietto, is the amount of smoke created by the burning of the bread. Few glassblowing facilities allow such high levels of smoke; only the Nationaal Glasmuseum was willing to take on the project.

The designer found that stale bread works better, as it creates a firmer mould for the glass.

Other objects that Baietto created for the project include a porcelain vase, created from a cast of a baguette baked by the designer's family.

He also created a porcelain shoe, based on the safety shoe worn by bakery workers, tiles cast from discarded bakery workwear and ceramic trays that mimic the form of used cardboard boxes.

With these objects, Baietto hopes to show that all design products are part of a system of ideologies, making them susceptible to a range of different interpretations.

"When something is designed, it is actively materialising a belief system and worldview, infiltrating the designer's values and moral positions even when it's not consciously intended," he said.

"In everyday life, no object or practice is neutral, but rather a result of its context and its ideological influences."

Baietto completed the project for his masters degree at Design Academy Eindhoven, as part of the contextual design programme.

For the Design Academy Eindhoven graduation show, which took place during Dutch Design Week, Baietto created an installation that encouraged visitors to walk over some of the workwear tiles, breaking them in the process.

He also designed an animatronic dustbin to act as a critic for the exhibition. With bulging eyes, this bin moved was programmed to move around the space, reciting a recorded monologue.

Both moves were intended to shape the experience of Baietto's designs and the perception of their value.

Other projects on show at the DAE graduate show included garments designed to heal trauma, a giant dress and tools for turning human breath into clouds.

The DAE Graduation Show 2021 was exhibited from 16 to 24 October, as part of Dutch Design Week. See Dezeen Events Guide for an up-to-date list of architecture and design events taking place around the world.