The LightVision headset aims to make meditation easier by combining traditional techniques with vibration, sound and light, which it says helps users relax and change their pattern of thoughts.

It was designed for US startup Resonate by design studio Layer, whose founder Benjamin Hubert described the headset as a way to make the meditation process more accessible.

"It's certainly novel, as physical hardware like this has never been used in this space – we've had digital apps for years, but moving that digital experience to hardware that removes the need to 'learn' how to meditate makes the process more accessible and far more effective," Hubert told Dezeen.

Layer's meditation headset uses an LED light matrix – a grid of small individual LEDs close together – that turns nature videos, including videos of trees swaying in the breeze and films of swimming fish, into biomorphic patterns.

These can be seen through closed eyes and are used together with synchronised vibrations and a soundtrack of monaural and binaural beats and isochronic tones – single tones at regular intervals – to activate the brain's "frequency-following" response.

The LED light matrix "allows powerful meditation to be attained simply and effortlessly, regardless of level of experience," Layer said. The different visual and auditory effects combine to guide the user's mind to deep meditative states.

"According to studies conducted by Resonate, users report a 51 per cent decrease in stress and anxiety levels after a single 20-minute Resonate session," the brand said.

LightVision has a minimalist design with an exterior casing that was developed to follow the contours of the user's face to create "complete immersion".

Inside the headset, a widescreen LED matrix display shows the biomorphic patterns. Its brightness, as well as the volume settings, can be controlled via an interface at the underside of the headset.

The headset's casing is wrapped in textile, and it features an adjustable strap with metallic branding details. 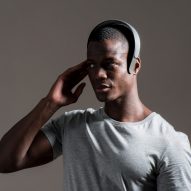 "These details bring the tech accessory closer to a piece of fashion," Layer said.

"The design also expresses the product's functionality. Lighting strips, for example, frame the internal edges of the headset casting light on the face to create an outward expression of the meditation experience and acting as a 'do not disturb' signal to others."

Though people might think of and use meditation as a way to escape from our tech-surrounded everyday lives, Hubert believes the solution could be to refocus the technology that we use, rather than avoid it.

"We shouldn't feel the need to get away from tech per se, only what the tech does (or doesn't do) for us. Absolutely escape your emails, time your social media, stop binge-watching media, get away from your Zoom calls but then why not re-focus tech to help us be better?" Hubert added.

Previous designs by his studio include a collection of smart devices made to increase wellbeing and the packaging and branding for wellness brand Never Go Alone.

LightVision launched at Design Miami, which takes place during Miami art week. See Dezeen Events Guide for an up-to-date list of architecture and design events taking place around the world.