Described as "Shanghai's Hanging Gardens of Babylon", the mixed-use development features up to 1,000 pillars, each with a tree planted on top. It was designed by Heatherwick for developer Tian An.

The first phase of 1,000 Trees opened with a lighting ceremony on 22 December in Shanghai's Putuo district after eight years of development. A full set of images of the project is set to be released later this month.

It is located next to the city's M50 arts district and a public park. Comprising two mountain-like peaks, the development will span 300,000 square metres and encompass restaurants, museums and galleries, as well as a number of historic buildings, when complete.

"It will become the most shining 'pearl' along the 42-kilometer-long Suzhou Creek riverside in Shanghai's downtown," Song Shengli, deputy director of Putuo's publicity department, said in a statement.

Heatherwick's design for the development sees the columns that provide structural support for the building turned into decorative planters that each hold a handful of trees. 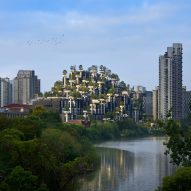 "We see the planters as natural extensions of the columns, almost like a shoot that has worked its way through three levels of car park, eight levels of retail, and then up and out to the roofscape to blossom," Heatherwick Studio's partner Lisa Finlay told Dezeen in 2019.

Inside the pillars is a hidden watering system to keep the trees healthy. More than 70 different tree species were used for the 1,000 Trees project.

A second phase of the project, a taller structure that will feature hanging gardens, is under construction and will open in two years, according to the Shanghai Municipal People's Government. An enclosed link bridge, tunnel and ground floor drop-off will connect the two "mountains".

Both parts of the development are located on the site of a former flour factory, part of which has been incorporated into the new complex, including an old bell tower that will now function as a sightseeing elevator. 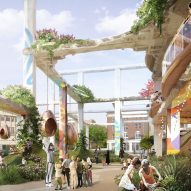 "The aim was (to have) a warm and live structure with harmonious relationship between human and nature, rather than a concrete mammoth," said Huang Jingsheng, project marketing general manager.

Another Heatherwick project featuring plant-covered columns, Little Island, opened in New York in May of this year.

The designer also recently unveiled plans for a mixed-used development in Nottingham, UK, that would see the studio retain and rewild the frame of a partly demolished shopping centre.

The photography is by Qingyan Zhu unless otherwise stated.