Polish practice Wiercinski Studio has converted two shipping containers into a portable house, which is currently located in a garden next to the Szelągowski National Park in Poznań.

The clients, described by Poznań-based Wiercinski Studio as "a couple of brave people interested in searching for difficult to adapt spaces", wanted a structure that would serve as both a home and office that could be relocated.

"The implementation of a portable cabin and remote workplace turned out to be a great response to the present times," said the studio.

"The great advantage of this facility is its mobility," it continued.

"The house ceases to be a property tied to a specific space, but it can change its location along with the changes accompanying the life of the owners."

Portable Cabin was placed on top of another pair of containers that are being used for garden storage. All four containers were painted in a matching olive green to "camouflage" them from the park.

Apart from this green paint, the exterior of the shipping containers has been left as-found, "to show the sincerity of the raw construction material," said the practice.

Due to the sloping site, the upper pair of containers have been shifted slightly northwards, creating a 25-square-metre roof terrace looking out over a nearby river on the roof of the lower containers.

The cabin, which was insulated with spray foam before being lined with birch plywood panels, was constructed in an off-site production hall and then transported to the site.

Keeping the internal finishes minimal enabled the creation of 2.6 metre-high ceilings, disguising the central join of the two container frames. 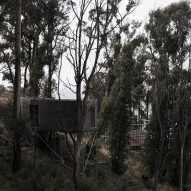 An external steel and wood staircase leads up into the interior, which is organised with a bedroom to the north and an open plan living, dining and workspace to the south, with a bathroom between.

Wooden planks line the floors of the interior, which features simple furniture and light fittings around a metal fitted kitchen. On the sides of the containers, a series of small, mid-level windows are positioned to allow for a variety of interior layouts.

At the southern end of the containers, the doors have been replaced with large areas of glazing, incorporating a door leading onto the decked terrace which is wrapped by a curved metal balustrade.

In future, the clients plan to relocate Portable Cabin into the nearby forest, and eventually make it possible for the structure to be installed above water.

For more examples of shipping container architecture see Dezeen's recent round-up, which includes a stadium in Qatar made using 974 containers and a floating student residence by BIG made using a ring of nine containers.

Also included in the roundup are a trio of shipping containers that were converted into a weekend retreat set on stilts by Melbourne practice Studio Edwards and TOOP Architectuur's mirrored architects' studio.

The photography is by ONI studio.