Milan has committed itself to constructing 750 kilometres of bike paths by 2035 as part of a plan to make cycling the most convenient form of local transport.

Based on data about the daily movements of residents, the Cambio network will link existing cycle paths and supplement them with new "super-cycle corridors" that will connect the city of Milan in northern Italy and all 133 communes within its wider metropolitan area.

Once completed, it will place 86 per cent of Milan's population and 80 per cent of services, including hospitals, schools and businesses, within one kilometre of a bike route.

The network of 24 cycle highways is set to be completed in 2035, by which time the city hopes that 20 per cent of all local transport will be undertaken by bike.

The initiative forms part of the city's larger goal to reach net-zero emissions by 2050, in line with the goals set out in the Paris Agreement.

"It is a system project that sees cycling as a driving force for development, which integrates environmental protection, safety, economic development and general wellbeing," said the Metropolitan Council of Milan.

"​​The development of cycling leads to the reduction of greenhouse gases, creating green corridors for the protection of biodiversity, making travel safer for all types of cyclists, improving public health and increasing the daily opportunities for exercise and movement."

The Cambio network will consist of four circular lines arranged concentrically around the city centre and intersected by 16 radial lines, while four long-distance greenways will connect the metropolitan area's perimeter.

As well as cycle paths, the network will have dedicated bicycle parking stations, physical and digital wayfinding displays as well as low-impact lighting. This will be charged during the day and light up only in response to movement at night, in order to conserve energy. 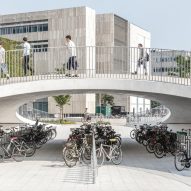 Although the project will cost €250 million, the Metropolitan Council of Milan estimates that it will generate savings to the effect of more than €1 billion by reducing congestion and road accidents, as well as improving the health of both people and the environment.

A similar infrastructure overhaul is being undertaken in Paris, where the Plan Velo will see 130 kilometres of cycle paths constructed by 2026 to make the entire city accessible by bike.

As the European Union works to meet its own net-zero goals, the European Commission recently proposed formalising these disparate schemes as part of a bloc-wide policy to fund and prioritise "active mobility" modes such as cycling.

The top photograph is by Pawel Czerwinski via Unsplash.