A sunken bicycle workshop sits at the end of a classical-style walled garden at this extension to a townhouse in Ghent, completed by Belgian practice Graux & Baeyens Architecten.

In addition to the workshop, a stack of three new forms designed by the local practice adds a kitchen and dining space, bathroom and bedroom to the dwelling on the Visserij canal.

Called House C-DF, the townhouse had an existing narrow rear extension that has been extended to fill the width of the plot, creating a "logical flow" and visual connection through the home to the garden.

"While the main residence required few modifications, tabula rasa was created with the old extension of the house," said the practice.

"Rather than keep this extension narrow and deep as it originally was, it was decided to have it fanned out over the full width of the outdoor space," Graux & Baeyens Architecten added.

"This intervention immediately improved the enfilade between the front, intermediate and back chambers."

The existing extension was enlarged with a structure of prefabricated steel, left exposed internally to create a series of fins that contrast the original structure and to create space for built-in cabinets.

A triangular skylight has been inserted between the old and new extensions to illuminate the space, and wood-framed sliding glass doors lead out onto the paved garden. 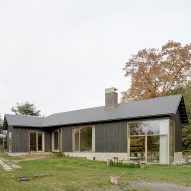 "The steel fins were deliberately not concealed, but subtly painted in white and milled, creating a poetic play of light in the extension," explained the practice.

"The fins also determine the rhythm of the cabinets that came between them, which, thanks to a subtle interruption, accentuate the depth of the house," it continued.

Atop the steel frame of this rear extension is a new first-floor bathroom, lined in terrazzo and featuring a full-height window overlooking the city's rooftops that "ensures the residents shower with a view of Ghent," according to the practice.

On the second floor, a new bedroom and a mezzanine play room also features a fully-glazed wall looking out towards the rear of the home, contrasted by a thin dormer window opposite that overlooks the canal.

"The high window offers a beautiful view of historic Ghent but remains surprisingly human-sized thanks to the playful layout," said the practice.

At the end of the walled garden, the sunken bicycle workshop sits in a small volume finished in grey brickwork to match the existing garden walls, which have been fully restored.

Externally, the extensions have been unified by the use of pale timber planking and window frames, intended to create a "subtle point of contact between the two constructions."

Other extensions recently completely by Graux & Baeyens include the renovation and extension of a 1960s chalet in Destelbergen, and the modernisation of a bungalow in De Haan.