Hyundai has revealed its concept for a system called the "Mobility of Things", which would turn previously inanimate objects into robots and allow people to reconfigure spaces on demand.

Putting a twist on the last decade's Internet of Things, which was about giving objects the ability to send information between each other, the Mobility of Things gives objects the power to move, either autonomously or through human operation.

As part of the system, Hyundai has created a "Plug and Drive" (PnD) module that can be integrated with everyday items to make them mobile.

The South Korean automaker suggests that it could be used on objects such as tables, containers or bassinets, and that when applied more widely it could reconfigure whole spaces at the click of a button.

The company envisions this being useful for shared office spaces as well as retail and living environments.

"In the world to come, you won't move your things — they will move around you," said Hyundai vice-president and head of robotics lab Dong Jin Hyun in a presentation at the Consumer Electronics Show (CES) last week. "The PnD Module is adaptive and expandable to match human needs."

"It's this ability that makes changing practically any space possible," Hyun continued. "It's a way to configure spaces on demand."

The all-in-one PnD module combines steering, braking, electric drive and suspension hardware in a single unit attached to a wheel, as well as LiDAR and camera sensors to enable autonomous movement.

Hyundai exhibited several concept models demonstrating applications for the module at CES. The first was for personal mobility and took the form of a single-person pod built on the PnD platform and designed to integrate with public transport networks as a "last-mile" solution.

The pod would join onto a larger "mother shuttle" for most of the journey but would split off at either end to deliver its passenger to their door, either autonomously or through joystick operation.

Another concept was for "service mobility", such as carrying guests' luggage at a hotel, and a third was for "logistics mobility", which would chiefly involve transporting goods from warehouses. 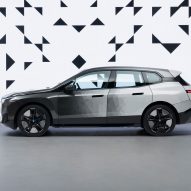 There is also a second module, the Drive & Lift (DnL), which can be mounted on each wheel to allow a platform to be steadily lifted up and down and to keep the body level while traversing uneven terrain.

Hyundai exhibited an application of DnL in its Mobile Eccentric Droid (MobED), a four-wheeled service robot that can carry a wide range of items.

Videos played at the presentation show Boston Dynamic's famous Spot robot "dog" being used as an assistant for a blind person and as an attendant visiting a patient in a hospital bed.

Hyundai's vision for mobility also includes the metaverse, with suggestions that robots could be operated from within the virtual world and that digital twins – computer models that use live data to create simulations of real-world objects and systems – could become more sophisticated.

"We are expanding the universe of mobility and giving people more options to live and move in the world like never before," said Hyundai chair Euisun Chung.

Hyundai is one of several carmakers investing heavily in robotics. In 2020 the company revealed its urban air mobility project developed jointly with Uber and in 2019 it showed off a concept for a "walking car" with robotic legs that would be able to cross disaster zones.