Scottish architect Luke McClelland has transformed a dark and ill-conceived apartment in Edinburgh's port area of Leith into a bright and contemporary home.

The ground floor flat, which dates back to the early 19th century, had been rented out for more than a decade before being purchased by its current owner.

As a result, its interiors suffered from a convoluted layout, considerable wear and tear, outdated facilities and several level changes in the floor, which sprung up as the basement of the Georgian building was converted for residential use.

"There was a lack of connectivity between the primary living spaces and a lack of light in the poorly planned kitchen," McClelland explained. "The property also needed to be fully rewired and re-plumbed."

Despite a restricted budget, McClelland found ways to brighten the apartment and improve how its living spaces are linked together.

Significant alterations were made in the kitchen, where the architect replaced the old cupboards with sleek off-the-shelf cabinets from IKEA.

The muted sage-green hue of the cabinet fronts was chosen to complement the grey terrazzo splashback, which features black, white and reddish flecks.

Natural light floods in through a reinstated window that was previously obstructed by the kitchen counter.

A new doorway lined with oak offcuts from the kitchen worktops now leads into the dining area.

Like the rest of the apartment, this space is finished with white-painted walls and oak parquet flooring laid in a chevron pattern. 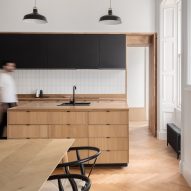 In the living room, McClelland installed oak-batten panelling beneath the window sills and across the chimney breast to replace the original surrounds, which a former tenant had torn down across the entire apartment save for the bedroom.

The lounge also accommodates a charcoal grey sofa alongside a geometric floor lamp and a few prints, including a striking portrait piece by a local artist.

The bathroom was reconfigured so that its curved wall becomes more of a focal point.

Before the renovation works, the wall was partially blocked off by a storage unit, which has now been removed.

The walls are covered in a mixture of terracotta-coloured tiles and the same terrazzo that appears in the kitchen.

A tall mirror above the sink emphasises the loftiness of the bathroom, which is the only space in the apartment that went unaffected by the basement conversion.

Elsewhere in Edinburgh, Luke McClelland has previously revamped his own home in the Comely Bank neighbourhood.

As part of the project, the architect carried out a number of changes to the floor plan, converting a disused pantry into a shower room and splitting the former living area into two bedrooms.

The photography is by ZAC and ZAC.