Search engine company Google has purchased the Renzo Piano-designed Central Saint Giles development in London for £730 million, as it commits to a future of physical office working.

The technology giant has agreed to buy Central Saint Giles, where it has rented office space since 2012, from the Legal & General Group and Mitsubishi Estate.

Google intends for the building complex – located in London's West End near Oxford Street, an area hard-hit by the exodus of office workers during the pandemic – to continue to serve as one of its London headquarters.

Designed by Piano, the complex has a bright facade in tiled blocks of red, yellow, lime green and orange, not dissimilar to Google's own logo. It contains around 38,000 square metres of office space, which is currently shared between Google and other tenants.

In a post on Google's blog, UK & Ireland vice-president and managing director Ronan Harris said that the purchase signalled the company's confidence that workers would return to physical offices at the end of the pandemic.

"Based in London's thriving West End, our investment in this striking Renzo Piano-designed development represents our continued confidence in the office as a place for in-person collaboration and connection," said Harris.

Harris said that Google would accommodate employee preference to remain working remotely some of the time.

"Whilst the majority of our UK employees want to be on-site some of the time, they also want the flexibility of working from home a couple of days a week," he said. "Some of our people will want to be fully remote. Our future UK workplace has room for all of those possibilities."

Building to be refurbished

Google also announced that it would be giving its spaces at Central Saint Giles a multimillion-pound refurbishment over the next few years.

The refurbishment will focus on creating spaces that support Google's vision of the future of work, with an emphasis on collaboration, flexibility and wellbeing.

Renderings of the interiors by BDG Architects show spaces such as a "quiet zone" with nooks for individual-focused work and a wellness-orientated overhead art installation that provides "a window to the passing clouds".

There will also be "team pods", which Harris describes as "flexible new space types that can be reconfigured in multiple ways" depending on need – whether it's for focused work, collaboration or a mixture of both.

Covered outdoor workspaces will allow employees to work in the fresh air, while a feature staircase will encourage the movement of people across the building and open out to a lounge area on each floor.

Google now has 6,400 employees in the UK and will have capacity for 10,000 across its sites countrywide once its King's Cross campus, which was designed by BIG and Thomas Heatherwick, is complete.

The campus represents the company's first wholly owned and designed building outside of the US. It will comprise more than 92,900 square metres of office space, of which Google will occupy approximately two-thirds. 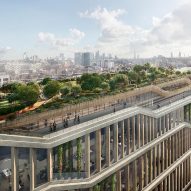 Central Saint Giles was Piano's first work in the UK, completed ahead of the Shard. Located at 1 Saint Giles High Street, its mid-rise buildings are arranged around a public courtyard with shops and restaurants.

When Google first unveiled its offices there a decade ago, the focus was on social and fitness spaces, balcony gardens that enabled staff to grow their own vegetables, and bright colours that included giant Union Jacks.

The main image is by Timo Tijhof. The other images are courtesy of Google.