This video, shared exclusively with Dezeen, shows the living area of a Milanese apartment by Memphis Group founder Ettore Sottsass being dismantled and rebuilt inside the city's Triennale di Milano museum.

The apartment, named Casa Lana, was originally designed by the Italian architect in 1965 for his close acquaintance Giovanni Lana, a lithographer and printer.

Now, with the help of donations from the architect's widow Barbara Radice Sottsass, Casa Lana's brightly-hued living room has been reconstructed within the Triennale di Milano as part of a permanent new installation.

Italian architect Stefano Boeri, who is the museum's president, said putting the Sottsass-designed room on display to the public is like "giving the world a wonderful surprise".

"Milan is now home to an authentic time machine, created by one of the international geniuses of the twentieth century," Boeri said.

Staff from the archive and restoration team at the Triennale di Milano visited Casa Lana and carefully documented the layout of the living room before taking it apart piece by piece.

The parts were then transported to the museum and painstakingly put back together to form a display on the first floor.

At the heart of the room is a three-sided wooden enclosure, where Lana would retreat to listen to music or conversate with guests. Inside, there's a trio of sofas – two upholstered in indigo-blue fabric and the third in a similar pink hue to the magenta carpet.

Winding around the top of the structure are a few built-in shelves where artworks and other ornaments can be displayed. There are also a couple of square openings inset with beaded wooden screens.

Beyond the enclosure, the rest of the room has been kept largely open plan as Sottsass wanted it to have a piazza-like layout that allowed inhabitants to roam and interact freely.

As a result, furniture items like storage cupboards and desks are pushed to the room's periphery. 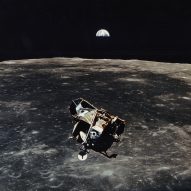 Throughout 2022, a series of Sottsass-focused exhibitions will run alongside the Casa Lana display, put together by Triennale di Milano curator Marco Sammicheli and designed by Christoph Radl, who was a frequent collaborator of the Memphis Group founder.

Il Calcolo, which is set to run from May to November, will look at how the designer's work intersected with technology.

The third show, La Parola, will kick off in December 2022 and delve into the narrative and literary significance of Sottsass's designs.

Other major shows taking place at the museum this year include the 23rd edition of the Triennale Milano International Exhibition.

Under the theme Unknown Unknowns: An Introduction to Mysteries, it will see scientists, artists and intellectuals from across the globe collaborate to answer complex questions about human existence.

The photography is by Gianluca Di Ioia.