Dutch studios IND [Inter.National.Design] and Powerhouse Company have completed the Çanakkale Antenna Tower, a broadcasting and observation tower made from Corten steel to contrast a surrounding forest.

IND [Inter.National.Design] and Powerhouse Company designed the looping building, which is located in Çanakkale, Turkey, to form a continuation of an existing forest path. As well as a multimedia and telecom broadcast antenna, it also houses exhibition spaces, recreational facilities and an observation deck.

The 3,000-square-metre building is made from Corten steel. The studios chose the material for both its colour and its ability to withstand the weather.

"The project's principal material is Corten steel for its suitability for outdoor sculpture and its natural rust color," Arman Akdogan, partner at IND [Inter.National.Design], told Dezeen.

"Corten or weathering steel is a type of steel alloy that develops a stable, rust-like appearance after exposure to the weather," Akdogan added.

"This finish forms a protective layer that prevents atmospheric corrosion. Its rustic and antique appearance offers a wonderful contrast with the green forest and reflects the long history of Çanakkale."

The tower's site was partly occupied by a decommissioned military complex, which meant it had strict plot boundaries that helped inform the curving path of the design.

Çanakkale Antenna Tower's public areas are separated from the technical areas, which are located in a concrete underground bunker. The looping tower has a walkable roof, which continues the forest path and is made from wood. 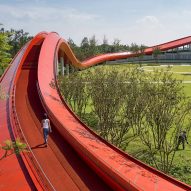 By elevating much of the structure, the studios aimed to create a building that would allow the landscape to "flow uninterruptedly" and leave a minimal footprint.

"The beauty of the site, a hilltop forest facing the Dardanelles Strait, inspired the creation of a spatial experience that is intimately connected with the landscape – far removed from a conventional antenna tower design," Akdogan explained.

Visitors to the building walk along the forest path, which merges into the visitor centre as the building rises from the ground before "shooting" up towards the sky in the form of a tower.

"It was a challenge to combine a public program with a (potentially hazardous) radio tower, yet we solved the puzzle with a single gesture," said Powerhouse Company co-founder Nanne de Ru.

The studios won an international competition to design the tower, beating firms including Snøhetta with Özer/Ürger Architects and Battle Mccarthy, who took second prize, and AL_A, which came in third.

Other recent projects by Powerhouse Company include the first mass-timber university building in the Netherlands and a reception building topped with a red circular walking trail in Chengdu, China.

The photography is by Sebastian van Damme.