The firm headed by architects Ladislav Kuba and Tomáš Pilař was tasked with overseeing the conversion of the former canteen into a headquarters for the Faculty of Humanities.

The original building was designed by architect Karel Prager, who was responsible for other modernist and brutalist buildings in the Czech Republic including the National Theatre and Federal Assembly in Prague.

The canteen and adjacent dormitory towers form part of an unfinished plan for the university campus, which is situated on the banks of the Vltava River to the north of the city centre.

The canteen was never fully used as intended and was in need of a radical redesign in order to meet the faculty's requirements.

Kuba & Pilař architekti recognised the architectural merit of the existing building, which was constructed using an innovative lift slab technique that involves pouring concrete floor slabs at ground level and lifting them up using hydraulic jacks.

The architects sought to retain the structure's character and form whilst reorganising the internal spaces to accommodate the required teaching and administrative spaces.

"The conversion project preserves the external shape, height and proportions of the original canteen building," said the architects.

"The main intervention is the creation of a generous central hall, illuminated from above, with daylight coming in between the trusses of the skylights."

A large concrete plateau surrounds the faculty building and connects it to the two dormitory blocks. The building is arranged over three floors plus a basement, with the entrance on the middle level.

A new glazed curtain wall suspended from the existing facades helps to improve the building's acoustic and ecological properties while referencing its structural form. 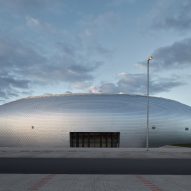 "The external structural glazing is designed primarily as an effective acoustic protection against the noise from a six-lane ring road in the immediate vicinity of the building," explained Kuba & Pilař architekti.

"A double-skin facade allows for natural ventilation and regulated sun shading of the interior space," the studio added, "while the rounded glass corners are a link to the original architecture."

Inside the building, an existing central stairwell was expanded to create a void that visually connects all three levels. A pair of differently shaped staircases at either end of the new lobby lead to the floors above and below.

Cantilevered galleries surrounding the central hall provide access to seminar rooms and staff offices, with two lifts and fire-escape staircases positioned on either side of the building.

The lower level accommodates large lecture halls, an auditorium, a library and the dean's office. These spaces are lined with full-height glazed walls and curtains that provide privacy when required.

A pared-back material palette dominated by exposed concrete is used throughout the faculty. The concrete is complemented by metal mesh ceilings and black cement flooring.

Modular foam furniture from Belgian brand Sixinch creates a strong statement across the two main levels of the central hall. The lobby level features circular elements in white, with bright orange benches used to define spaces on the floor below.

Elsewhere in Prague, Sporadical built a reflective, domed sports hall that is covered in aluminium shingles.

Along the city's waterfront, Petr Janda transformed a number of vaults on the banks of the Vltava River into public spaces.

The photography is by David Korsa.