Postgraduate students at the Royal College of Art have created a portable tool to help women check their breasts for abnormalities.

The handheld device, called Dotplot, is a breast health monitoring tool that uses sensing technology – a technology that uses sensors to acquire information by detecting the physical property quantities and convert them into readable signals – to build a map of the user's chest and take readings of their breast tissue.

Dotplot is programmed to identify different areas around the breast in order to map the reading to a specific point, meaning that any changes in tissue density can easily be detected.

When used over a period of several months, it's able to provide month-by-month comparisons of breast tissue, helping to flag abnormalities as soon as possible. The long-term goal is to help more women detect potential breast cancer earlier.

"We want women to take care of their breast health with confidence, clarity and ease," they continued.

Women can connect the Dotplot device to an app via Bluetooth and while pressing the device to their chest, they can read a step-by-step guide on how to check each area of their breasts.

Instructions include prompting women to follow the on-screen marker to move the device across the chest to cover the entire chest.

The app provides real-time feedback and at the end of each check, it creates a report which can be compared to statistics gathered from previous months. It also reminds users to conduct a check each month.

"Dotplot's technology identifies the location of the device on the women's torso, then takes a reading of that specific location which can be seen on your phone screen –  it then keeps blinking on the specific position until it receives a reading for that location," they explained.

The first phase of developing the device prototype involved asking a group of women of different ages how regularly and in what ways they check their breasts.

The students found that many women are confused or even scared of conducting breast self-checks, despite it being a key method in helping to detect breast cancer in its early stages. This feedback informed the final design. 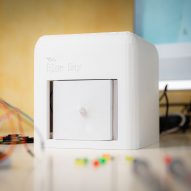 "We were surprised to hear that women who had been shown how to conduct self-checks by their general practitioners were still not 100 per cent sure that they were doing them correctly," said the designers.

"Others worry that the moment a lump is found, death is certain and this has deterred women from checking their breasts as regularly as they should, in fear of feeling a lump or abnormality."

"It highlighted that the demonstrations, pamphlets and tutorials provided for breast health care – though useful – were insufficient," they continued.

The students hope that Dotplot will help prevent more cancer diagnoses while encouraging women to make a habit of checking their breasts.

"We aim to make breast health care routine and demonstrate that discovering changes in your breast tissue is not something to be feared – especially when detected in good time," they said.

"We then asked ourselves, how can we ensure that women perform these checks correctly in order to reduce the number of deaths per incidence of breast cancer?" they added.

"The good news is that early detection increases survival rates to 93 per cent, so when caught on time the prognosis is significantly improved."

Past designs by students at the RCA include Nat Martin's Scroll ring which enables wearers to interact with augmented reality and Brian Black's virtual-reality proposal that would give people the opportunity to drive NASA's rovers in space.