Design collective The Decorators has created three pieces of inflatable furniture that encourage humans and bacteria to intermingle through the process of food fermentation.

The three design sculptures include a 12-person table for making kimchi, a small table for producing labneh cheese and a sofa that can be used for proving the dough for bread.

Designers Xavier Llarch Font and Mariana Pestana of The Decorators wanted to highlight the positive role that bacterial microbes can play in human life.

The project builds on the understanding that microbes, such as those cultivated in food fermentation, can improve human digestion. They are also believed to produce feelings of joy through the release of hormones like dopamine and serotonin.

At a time when Covid-19 has increased public fear of both viruses and human interaction, Llarch Font and Pestana hoped to use bacteria as a way of forging rather than alienating communities.

"We've been made more aware of how non-human agents such as virus bacteria and microbes impact our lives," said Llarch Font.

"This has dramatically changed the way we interact with each other and our very notion of community."

The first piece of inflatable furniture is Kimchi-Pool, a large basin-style table with irregularly-shaped seats around the outside.

A group of up to 12 people can sit or kneel at the table to collectively make kimchee, a Korean food created from seasoned and fermented cabbage and radish napa.

Cheese-Board provides a surface and drying rack for making labneh, a soft cheese that is traditionally made in Lebanon.

Sofa-Bread is a tiered seat that invites bread makers to lounge while they wait for their bread dough to prove – the process where yeast ferments the dough – before baking.

"We were interested in this idea of domesticity, how these objects become like kitchen utensils," said Llarch Font.

The Decorators produced the designs through a fellowship with the Stanley Picker Gallery at Kingston University in southwest London.

The project began in 2018 but naturally took on a new dimension in light of the pandemic – a time when antibacterial hand washes became part of everyday culture, but people also starting experimenting with recipes for making fermented foods at home. 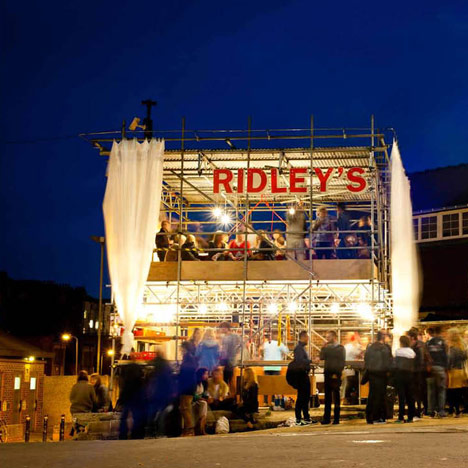 The designers hoped to create a reminder that these foods were not always just hobbies to share on social media, but staple foods created through common domestic rituals.

Llarch Font points to the communal kimchee-making that still takes place today, while Pestana recalls how her grandmother would put bread dough above the fireplace.

"It was something that you lived with," she said.

All three inflatables have been brought to life through performances.

The kimchee table was used by the Kimjang Project, a spinoff of the Kingston Korea Festival, while the bread sofa was brought to life in a performance by artist Laura Wilson.

The Decorators produced a film to accompany the designs

The Decorators have also produced a film that explains the background behind the project, which was exhibited alongside the designs in an exhibition at Stanley Picker Gallery.

Portal Tables was on show at the Stanley Picker Gallery from 18 November 2021 to 5 February 2022. See Dezeen Events Guide for an up-to-date list of architecture and design events taking place around the world.

Photography is by Sergio Márquez/The Decorators, unless otherwise indicated.