Architects and designers in Ukraine have told Dezeen how they have been forced to shut their studios, pause their projects and seek shelter or flee their country as Russian forces invaded this week.

"Putin, like Hitler, declared war at 4 am and an hour later began shelling," said Angelika Garusova, who runs Ukraine's Art Space interior awards. "We decided to leave Kyiv. I'm afraid nothing good awaits Ukraine in the near future."

"We closed both of our offices and everybody from our team is trying to get out of the unsafe zones," wrote Alexey Gulesha of Sivak & Partners from a bomb shelter in the Ukrainian capital. "But bombing is in every city, so there are no safe zones at the moment."

"My mom and me are ready to run to the bomb shelter at any second, having our bags with water and warm clothes near the door," said designer Katerina Kovalenko.

"I hate all of this. I planned my life, I wanted to study, to design, to meet my clients, to attend lectures about architecture. But instead, the lives of the whole country have been put on pause and hidden underground."

Russia's invasion of Ukraine kicked off in the early hours of Thursday morning after president Vladimir Putin announced the "special military operation" in a televised speech.

In the preceding months, Putin had moved nearly 200,000 troops to the Ukrainian border, which have now begun to advance towards Kyiv from three sides in a bid to encircle the Ukrainian capital and force a regime change.

More than 160 missiles were fired on the first day of the invasion, with 57 people killed and 169 wounded.

Architecture studio Balbek Bureau taught its staff first aid so that they would be able to help those who are injured.

"We learned how to deliver basic life support: determining the person's condition, doing CPR on a mannequin, and applying tourniquets," the studio wrote on Instagram.

"Our team's work chat now serves to find out if everyone is safe, where everyone is and to coordinate actions," added Victoriya Yakusha, founder of Yakusha Design and furniture brand Faina.

"It's a real war, not an operation, not a military exercise or demilitarisation. Civilians are being killed, residential areas are being hit."

Many locals sought refuge not just in bomb shelters but also in underground metro stations, much like Londoners did during the Blitz.

Others, like interior designer Yova Yager, spent the night in their own basement. "It's all a dream, an unreal dream," she wrote on Instagram.

"Every Ukrainian soul is fighting now," added Kovalenko, who runs interior design studio 725. "All my friends in the concrete basements, sleeping on the marble floor of the metro stations and just hoping for this to finish."

The designer travelled from Kyiv to her hometown of Kryvyi Rih in central Ukraine a few days before the invasion to spend time with her mother on her birthday.

"That morning, I met the war in the city where I was born," she said.

"To be honest I hate all these fashion weeks, music festivals, stories of people who just pretend that nothing has happened," Kovalenko added. "War is much closer than you think."

Thousands of people fleeing by car

Several members of Balbek Bureau's team have taken up arms to defend their country, while others are relocating to the west of Ukraine where things are "relatively calm and safe" to continue work on the studio's international projects in Singapore, New York and Sonora, California.

"We are open to international cooperation proposals except for projects and clients from Russia and Belarus in order to be able to support our team and the economy of Ukraine," the practice said.

Design studio Sivak & Partners temporarily halted work on all of its projects. And co-owner Gulesha spent all of last night and half of Thursday in a bomb shelter from where he shared photos taken by his team, showing people sleeping in metro stations and windows punctured by bullet holes or covered in tape to prevent shards of flying glass. 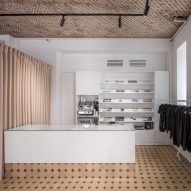 Several of the studio's employees are now trying to cross the borders to Romania and Moldova in the hopes of joining the roughly 100,000 people who have already fled Ukraine.

With the country's major airports hit by missiles, many have taken to crossing the borders into Ukraine's western neighbours by car.

Among them is Garusova, who left Kyiv on Thursday afternoon and only stopped to nap in her car for a few hours at four in the morning.

"Awareness of reality has not yet come and still, I caught myself in the thought that I want to live in Ukraine, with its traditions, wonderfully melodic language, songs and kind people," she said. "I don't want a renewed Ukraine with a Russian ruler."

Designers "feel no help from Europe"

Earlier this week, the US, UK and EU imposed a slew of economic sanctions on Russia in a bid to prevent an invasion.

These are now set to tighten, as Western leaders including British Prime Minister Boris Johnson have condemned Putin's "unprovoked attack on Ukraine".

But as the country is not a member of NATO, none have promised to send in troops, which has left some Ukrainians feeling abandoned by Western politicians.

"In this situation, Ukrainians want to receive not words of support but real actions from the Western world," Yakusha agreed. "Today, Ukraine is a shield from Russian aggression."

"We feel no help from Europe and it is very sad," Gulesha agreed.

Meanwhile, everyday citizens across the world have taken to the streets and to the internet to show their support.

"Fuck this unnecessary war," Elle Decoration Czech editor Eva Slunečková wrote on Instagram. "Stay strong Ukraine. No one should take your freedom like that, it's shameful."

Anti-war protests broke out in European capitals from London to Paris and Prague, as well as in 53 Russian cities where more than 1,700 people were detained during the demonstrations.

The main image is by design journalist Valeria Savenko.