Jack Young's book The Council House aims to capture the beauty of London's council estates, which he photographed to "look like they could be perched on an Italian hillside". He chooses 10 favourites for Dezeen.

The Council House collects 68 of London's "most innovative and iconic" council homes, including recognisable examples such as Ernö Goldfinger's Trellick Tower as well as lesser-known buildings such as Spedan Close.

The buildings were lensed by photographer Young in the past three years, just over a century after the 1919 Addison Act was passed to provide subsidised housing construction in the UK.

Young, who works as a digital product designer and lives on the Lettsom Estate in Camberwell, hopes the book will change some of the perceptions people have about these often unappreciated buildings.

"They are so often depicted in black and white photography which highlights its often brutal forms, or on a dark wet night as the gritty backdrop to a television drama," Young told Dezeen. 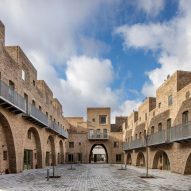 "Those depictions start to drive a narrative and can create negative stereotypes," he added.

"I was determined to catch these buildings in their best light, to really capture their beauty, and to do so I limited my photographic expeditions to when the sun was shining and the birds were singing – it is remarkable how many of the estates look like they could be perched on an Italian hillside."

Although his intention was to draw attention to the beauty of council houses, Young says that many are sadly neglected, which has made them less attractive.

"While the book aims to capture these buildings at their best, the sad reality is that far too many of London’s estates have slipped into disrepair after years of neglect," he said.

However, the book's introduction — A Brief History of Council Housing by John Grindrod – offers hope that council housing might once again be appreciated thanks to new designs by architects including Peter Barber, Mikhail Riches and Cathy Hawley.

"Hopefully, in time, we can begin to restore some of the rightful pride that was once felt towards council housing," Young concluded.

Read on for Young's selection of iconic London council homes:

"Trellick Tower is the poster boy of postwar council housing in London. Its instantly recognisable silhouette transcends niche architectural obscurity, becoming a brutal landmark that has truly infiltrated the mainstream.

"Inside the iconic walls, however, is a secret world belonging exclusively to its residents. Dramatic bush-hammered concrete makes way for colourful rejoice, as the stained-glass mosaic bathes the tower’s foyer in euphoric light as if entering a concrete cathedral."

"My intention with the book was always to champion lesser-known estates and pieces of architecture, as well as some of the more iconic buildings, somewhere like Trellick Tower – the shadow of which Holmefield House sits beneath.

"With its shimmering tiles, mock-classical pillars and porthole windows, the block comes across as a bit wacky and unusual, which I love and think is reminiscent of a lot of the post-war council buildings, where creativity seemed to be at an all-time high.

"The photo was a total act of luck, as while I was taking out my camera I heard the rumble of the Volkswagen's engine coming around the corner. With no time to set up a tripod or to worry about composition, it was just point-and-shoot. The blues matched up perfectly and I knew this shot would be a standout image for me in the final book."

"Architect Berthold Lubetkin believed that 'a staircase is a dance' and at this Grade II-listed block he put on a once-in-a-lifetime performance. Reaching from the ground to the sixth floor, the freestanding staircase offers uninterrupted views from the bottom to the top of the building, resulting in an exceptional feeling of light and space.

"Recently restored to its original lipstick red, the underbelly of the staircase creates a geometric kaleidoscope as you look up in inevitable awe from the lobby – which also includes an original mural by Lubetkins collaborator, Peter Yates."

"The Brunswick Centre is an example of restoration and regeneration done right, the results of which breathed life and light back into a modernist icon. By the end of the 20th century, the Centre was severely run-down; the unpainted concrete facade (a cost-cutting measure) had deteriorated, the plaza had been neglected and the flats were prone to leaks.

"It wasn’t until its Grade ll-listing in 2000 that architects Levitt Bernstein were able to turn the Centre into the holistic community that it was originally intended to be. Completed in 2006, the practice worked with original architect Patrick Hodgkinson to see the centre painted the cream colour that was always intended, and the upgraded shopping street with enlarged units saw retailers stream back in."

"The estate that we all have to thank for creating the famous Chamberlin, Powell and Bon architecture firm – responsible for some of the country's most celebrated post-war architecture, which includes next-doors concrete utopia, the Barbican. As with many schemes at the time, the contract was decided by competition, to which the three architects made a pact to form a partnership should one of them win – that architect would be Geoffry Powell.

"Chamberlain, Powell and Bon were as interested in the spaces between the building as they were in the buildings themselves during the planning of Golden Lane. Communal gardens can be found peppered throughout, the views from which, if you catch them just right, often result in a heart-soaring vista of coloured blocks, four or five at a time.

"The most impressive garden, however, is that on top of Great Arthur House, which although very rarely open, even to residents, boasts unrivalled views of the city."

"Formerly known as Branch Hill Estate, Spedan Close is a slice of Mediterranean charm sandwiched between quintessentially English greenery. Nestled inside the densely treelined Hampstead woods, the estate transports you to a secret world that feels a million miles from the stereotypical grey and gritty council estate too often portrayed in the media.

"The graphical nature of Lubetkin's work speaks to my background as a graphic designer – his outstanding use of colour and flair for geometric finishes marked his facade design out from virtually all of his contemporaries.

"Sivill House's hypnotically repetitive motif of geometric 'C' shapes was inspired (depending on who you ask) by either patterned carpets or the paintings of Chinese dragons that hung from the walls of Lubetkin's studio."

"This green oasis of an estate was one of the first low-rise, high-density public housing schemes to be built in London after the second world war. As well as winning awards for its landscaping, architects Darbourne and Darke have been widely praised for their sensitivity to the Grade l-listed Church of St James the Less, which the estate was built around.

"With complimenting brick-work and balanced proportions you could be forgiven at a glance for overlooking the 105 years between the two.

"Although the red bricks blend into one, and this is by no means a coincidence, Darbourne offered a refreshingly pragmatic case for the choice of brick over increasingly popular concrete: 'With brick, you can get the mortar over the face and the joint out of place, but even done poorly it is just about acceptable. That is not the case with concrete'."

Brunel Estate, by City of Westminster Department of Architecture and Planning under F G West, built 1970-74

"Designed in conjunction with one of the most prominent landscape architects of the time, Michael Brown, Brunel Estate is a masterclass in balancing heavy architecture with quiet moments of urban rest bite. Quiet, until you reach the site of the estate's iconic, monumental slide – which is a local hotspot for both residents and neighbouring children alike.

"Cascading down a particularly craggy brick face, the slide is now one of the country’s only Grade ll-listed pieces of play equipment, practically unaltered except for the addition of some all-too-sensible metal barriers."

"The World’s End Estate is one of a few that occupies a mind-bogglingly desirable piece of real estate, slap bang on the bank of the River Thames – another, featured in the book, is Falcon Point, located just outside Tate Modern.

"Here, seven towers of between 18 and 21 storeys define the estate's topography – the residents of which get to enjoy some of the most wonderful views of the river as it snakes its way towards the city.

"It is refreshing to imagine a time when a location like this wasn’t reserved for luxury apartments sold at an eye-watering price, but rather for the ordinary Londoner, the likes of which make our city the greatest cultural melting pot in the world."

The Council House by Jack Young is published by Hoxton Mini Press.