British architecture studio Zaha Hadid Architects has created a "cyber-urban" city in the metaverse where people can buy plots of land with cryptocurrency and enter digital buildings as an avatar.

Named Liberland Metaverse, the virtual city is a based on the Free Republic of Liberland – a micronation claimed by Czech politician Vít Jedlička that straddles disputed land between Croatia and Serbia.

"While the Liberland Metaverse is meant to spearhead the development of Liberland as a libertarian micronation it will also function as free standing virtual reality realm in its own right," explained Zaha Hadid Architects principal Patrik Schumacher.

"The ambition is for it to become the go-to site for networking and collaboration within the burgeoning web 3.0 industry, its the metaverse for metaverse developers and the crypto ecosystem at large," he told Dezeen.

Once inside the "cyber-urban crypto incubator", people can visit buildings designed by Zaha Hadid Architects including a city hall, plaza and exhibition centre.

Zaha Hadid Architects designed all of the buildings in its typical style with curvaceous, sinuous forms and rounded corners. However, many of the buildings have elements not supported from the ground – something that is not possible with gravity in the real world.

The city hall, which is the city's central urban heart has a terraced walkway that wraps around the building. Inside, benches are arranged in a horseshoe configuration and the Liberland flag can be seen hanging on the wall.

According to its website, the virtual campus, which is surrounded by water, will be used as a "networking hub for crypto projects, crypto companies and crypto events".

People can also buy plots of land and set up businesses in the virtual city and if they do so, they will also have a stake in the physical Liberland. 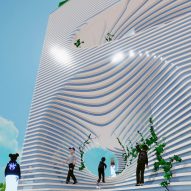 He believes that the metaverse will act as a catalyst for parametric design, as there are no urban planning limitations in the virtual spaces.

"The key advantages of virtual environments are their global accessibility and their adaptive, parametric malleability," Schumacher argued.

"The architectural and urban paradigm that is most congenial to this idea of a differentiated, evolving, multi-author urban field is parametricism," he said.

"We therefore predict that the development of the metaverse will boost parametricism."

According to Schumacher, Liberland Metaverse could become a template for the micronation's eventual physical presence.

"Our conception of the metaverse is based on realistic design and photo-realistic rendering," he said.

"We believe this, at least in the initial stages of metaverse development, allows for the fullest exploitation of the city analogy, utilising our innate and learned intuitive cognitive capacities with respect to orientation, wayfinding and the reading of subtle aesthetic social atmospheres and situations," he continued.

"This realism in our cyber-urban conception also allows for the later physical realisation of the designed metaverse spaces in the physical Liberland, to any desired extent."

The Republic of Liberland is an unofficial state that is not recognised by international organisation such as the United Nations.

Liberland is located between Croatia and Serbia on a plot of land that was unclaimed and uninhabited until 13 April 2015 when Jedlička proclaimed it as a country.

It now has its own community, flag, coat of arms, national anthem and a cryptocurrency called Liberland merit.

Although Schumacher believes that the future of the internet is the metaverse, he argues that physical spaces will always coexist alongside virtual ones and that the fusion of both worlds will continue to strengthen.

"Virtual and physical environments are ideally designed together," he added.

The images are courtesy of Zaha Hadid Architects unless stated otherwise.