People will adapt to the enhanced environments architects and designers are creating using technology, says Patrik Schumacher at a talk filmed by Dezeen for Grohe.

Speaking about the future of technology on a panel hosted by Dezeen and kitchen and bathroom company Grohe, Schumacher said that designers should develop a new aesthetic as "market leaders", and not worry whether people "like it right away".

"I think the role of design and architecture is to bring a level of newness into the discussion. We cannot rely on the past, we have to move forward," said Schumacher, who is the principal of Zaha Hadid Architects (ZHA).

Schumacher believes that as architects gain a better understanding of technology, and how it impacts the urban environment, people will learn to adapt to the buildings they create.

"First we need to develop an understanding of the environments that allow us to flourish if we acquire the user skills," he added. "That's leadership, and people are adapting to it."

People can "learn to love" new architecture and design

The ZHA principal spoke on the panel with Marius Myking, director of product design at Snøhetta, head of research at tech startup MX3D Filippo Gilardi, and Grohe's vice president of design Michael Seum. The panel was chaired by Dezeen assistant editor India Block.

Each expert on the panel spoke about recent projects and research where robotics, artificial intelligence, new manufacturing technologies, and generative design – where computers create designs from a set of parameters – are playing a role in the future of design and architecture.

Patrick Schumacher spoke about the future of technology at the talk

ZHA has been using generative design and virtual reality to test how people will respond to buildings, and how tech-enhanced buildings could respond or adapt to occupants' needs.

In discussion with the panellists about MX3D's 3D-printed concrete bridge for Amsterdam, Schumacher reiterated that people need to learn to adapt to new technologies and not the other way around. 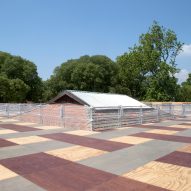 "People should learn to love this bridge because, downstream, it is lighter and more efficient than a kind of traditional welded up truss of beams. We should start to learn to hate those, because they're wasteful of time, material [and] energy," he said. "That's why we need aesthetic revolutions."

This is the same logic ZHA applies to large, complex building projects where architects use cutting-edge simulations to predict behaviours and how individuals and groups will move around a space.

"The buildings we offer, they initially might be alien, but if they allow you to learn to navigate and be close with many other people, many events, in a mixed-use environment, you'll learn the empowerment of that quite quickly," continued Schumacher.

Filippo Gilardi, head of research at tech startup MX3D, some about a 3D-printed bridge in Amsterdam

It's an approach that Schumacher believes could be applied to the very pressing future issues of single-use plastics. The Grohe event was entirely plastic bottle-free, with filtered water from its taps served in glass bottles.

"I've given up plastic bottles a while ago. But what I'm learning is that you need to develop this revulsion against plastic bottles. It becomes a sensibility you acquire and consumers will learn this quickly," said Schumacher. 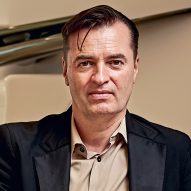 "A radical new product can fly through the market. That's why startup culture is so, so fascinating," he added.

"We are living in a world of opportunity, where many try to make this breakthrough, and some of them will win, and resources will flow back to do more. It's a nice risk-taking atmosphere."

All the keynote speakers spoke about the ways in which their work has pushed the boundaries of technology and design.

Gilardi explained the process of creating the world's first 3D-printed concrete bridge. MX3D used generative design to come up with the shape of the bridge, which was built using robots.

Getting people to trust a bridge that has been built without humans is a challenge of what Gilardi called the new industrial revolution. The team has outfitted the span with sensors to help them collect data on how people use the bridge to help inform future designs.

Myking discussed several new Snøhetta products that use technology to foster human connections and meaning.  Rather than use "technology for technology's sake", the architecture and design firms use it to make people's lives better, or on projects that are better for the environment.

Snøhetta projects that used technology in this manner include a door handle that can fit any hand, cutlery that doesn't need to be polished, and plans for a remote hotel on stilts that will rest lightly on the landscape and produce more energy than it uses.

The discussion was held after Grohe's The Wave of the Future talks, where the brand unveiled their new range of 3D-printed taps. The Atrio Icon 3D and Allure Brilliant Icon 3D are made of 3D-printed metal, opening the potential for customisation and bespoke projects for clients.