Researchers at the USA's Rensselaer Polytechnic Institute have invented an alternative to steel rebar made from hemp, which they claim avoids the problem of corrosion while cutting carbon emissions from construction.

The hemp rebar could be used to support concrete structures in the same way as steel and other rebars are today, but with a reduced environmental impact due to both its material makeup and its lifespan.

"Because of corrosion, in environments with high salt concentration, concrete structures are given a lifetime of 40 to 50 years," said Tsamis, who is an architect and an assistant professor at the Rensselaer Polytechnic Institute (RPI).

"If the rebar was not corroding, it would be three times that much, and that would create a significant overall contribution to cutting carbon emissions, because you have three times more service life for every single thing you make."

According to the RPI team, traditional steel rebar has a relatively low amount of embodied energy, particularly if it is made with recycled content, although the number conceals the impacts of its service life and maintenance needs. 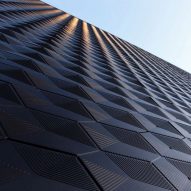 Ten future materials that could change the way we build

However, structural designs in highly corrosive environments will often use alternatives to traditional steel such as glass fibre reinforced polymer (GFRP) rebar, which has a high environmental impact.

The team says their preliminary results show the hemp rebar has a significantly lower amount of embodied energy than GFRP rebar while likely being as long-lasting, although the work is yet to be peer-reviewed.

The hemp rebar is made through a pultrusion process in which the fibres are pulled together with thermoplastics into a heated die and melted to form a solid bar.

The first step is to make the hemp into a rope containing a blend of natural and plastic fibres – the exact "recipe" for which the RPI team is still finessing.

Coils of this rope are then fed into a machine created especially for the process. This device, a CNC machine about the size of a small car, sits on-site and forges the rebar on demand, reading from digital files to bend and cut the product to the stipulated shape.

A bonus of this process is that it should decrease construction time. Walczyk and Tsamis also intend for it to be cost-competitive with or cheaper than standard steel rebar, unlike other non-corrodible alternatives currently available.

Their goal is to make the product the obvious choice even for projects without big budgets or sustainability goals. This has also influenced the design of the on-site pultrusion machine, which Tsamis describes as having a "John Deere" aesthetic, in reference to the tractor and heavy equipment company.

"Rebar is an everyday material," said Tsamis. "It is a material that needs to be communicated to every contractor, every builder in every village everywhere in the world. So this is on purpose a kind of John Deere-like, 'the people's machine'."

Walczyk and Tsamis, along with their student collaborators Daniel Cohen and Sharmad Joshi, hope to publish their first paper on the technology next year.

In the meantime they will continue to develop and test the rebar, along with a suite of other product, material and process innovations they are working on as part of a drive to develop next-generation building technology using hemp.

Industrial hemp is a class of the cannabis sativa plant that contains only a small amount of the psychoactive compound THC. Its fibre is among the strongest in the plant kingdom, as strong as glass fibre on a per weight basis, and the crop also excels at sequestering atmospheric carbon, doing so at twice the rate of trees.

Hemp growing has been recently legalised in the US and, as the crop is highly climate-resilient, could be attractive to farmers in an age of more unexpected changes in weather. At the moment, however, there is a lack of high-value products to drive demand, which is what Walczyk and Tsamis hope to change.

While their hemp rebar is a viable alternative to existing products now, they expect the technology to become even more efficient in the future as extraction processes are refined and plants bred for their fibre.

Hemp hurd, another part of the plant, is currently used in construction in the form of hempcrete, which has been used to build a sports centre and a social housing block in France.

Hempcrete has also been used to make prefabricated panels, such as those that make up the zero-carbon Flat House in rural England.