Two rooms – one white and one green – make up this striking colour-block pastry shop that architecture and interiors studio Casa Antillón has completed in Madrid.

The layout of Cara Mela naturally lends itself to having distinctly different coloured rooms, according to local studio Casa Antillón.

"From the beginning, we had a vision of a spatial cascade of rooms separated by colour-contrasted openings on the walls," the studio told Dezeen.

"It was very suitable with the architecture of the existing building, since the floor goes down from the entrance to the back of the shop."

Upon entering the pastry shop, which is located in Madrid's Chamberi neighbourhood, customers are welcomed into an all-white room.

The space is dominated by an angular stainless steel unit, incorporating a high counter where customers can stand and eat, a handwashing station and a glass display case that shows off Cara Mela's sweet treats.

This front room narrows slightly before opening up to reveal a seating area at the back of the shop. Casa Antillón nicknamed the two spaces after the different phases of a heartbeat – systole and diastole.

"Systole and diastole are the heart's movements of contraction and expansion," explained the studio. "For us, it refers to this spatial game where one space contracts and drags the visitor in, while the other expands letting the same visitor relax in the lounge." 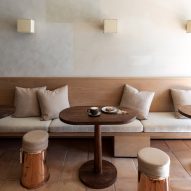 The rear room was finished entirely in a rich sea-green hue save for the steps leading down into the space, which are clad in white tiles to create the impression of the front room "spilling" into the back of the shop.

Dotted throughout the space are a few wriggly-edged tables balanced on slim metal legs, which are also sea green.

Right at the back of the room is a small window that looks through to the kitchen. Its ledge and inner frame are coated in a glossy, bright-red paint reminiscent of caramelised apples – one of the most popular offerings on Cara Mela's menu.

The same shade of red was also applied to the shop's front door.

Cara Mela isn't the first project the studio has completed in its hometown of Madrid. Elsewhere in the Spanish capital, the studio has designed Mood, a trendy hair salon with a galvanised steel facade.

The photography is by Imagen Subliminal.