Mossy gardens and curved elements made of medium-density fibreboard feature in an apartment-style exhibition space in São Paulo designed by Studio Melina Romano.

Casa Alma was designed for the 2021 edition of Casacor, São Paulo’s annual festival of architecture and interior design. Studio Melina Romano, which is locally based, created the space in partnership with Brazilian brand Duratex, which is a top producer of medium-density fibreboard (MDF).

The exhibition was located in an event space that is part of the Allianz Parque soccer stadium.

The goal for the 160-square-metre unit was to create a place where people could reconnect with their senses.

"It brings as a concept the investigation of different perceptions and feelings of the visitors at each setting, from the smallest details to the atmosphere and experience provided by each space," the team said.

Rectangular in plan, the dwelling is composed of three distinct zones, each with its own "sensorial atmosphere".

Spaces are divided up by gauzy curtains, along with slatted partitions made of MDF.

"I wanted to remove the rigid aspect of the surface and bring fluidity to the material so that the shapes would accompany the sense of the setting," said designer Melina Romano.

The unit also features landscaping along the edges that was created by Brazilian designer Aline Matsumoto. The gardens tie the three zones together and promote a light and relaxed atmosphere, the team said.

The first of the three zones, titled Slowness, is the living room, where comfy furniture invites visitors to relax and contemplate.

The space has a rounded sofa by Guilherme Wentz, a swoopy lounge chair by Martin Aisler and an olive green arm chair by Zanine Caldas. There also is a collection of tables – in resin and plaster – designed by Romano in collaboration with Bravio Studios.

Just off the living room, behind a white curtain, is a small home office. A scent was developed for space, which was envisioned as a mini atelier for a perfume maker.

Beyond the Slowness area, the visitor encounters a gourmet kitchen and dining room. 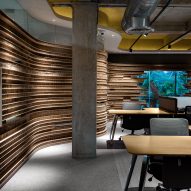 The space, called Soulful, features earthy materials and decor, such as a live-edge wooden table and bench from Arboreal and chairs from the +55 Brazilian Design Store. Overhead, an organic-shaped skylight brings in soft illumination.

In the kitchen, the team created a MDF cabinetry unit in a peachy colour inspired by chestnuts and seeds.

The third zone is the Well-Being space, which holds a bedroom and bathroom. Its design was informed by the importance of good daily habits for mental and physical health.

"The suite was created in this space, aiming for the reconnection of the resident with his self-knowledge, self-esteem and self-care," the team said.

The bedroom features a queen bed with a Casa Pronta frame, a nightstand by Loja Theo and Novo Ambeinte, and another nightstand from Estar Móveis. Similar to other millwork in the apartment, the armoire was designed by Romano and made using MDF.

The bathroom is fitted with a Romano-designed tub that was fabricated using waterproofed masonry – the same material used for the floor, walls and ceiling.

The garden in this area makes itself more apparent, the team said, noting that it consists of moss, blackberry branches, garlic and other elements.

Similar to the kitchen, a rounded skylight brings in soft light and contributes to the earthy atmosphere.

The photography is by Denilson Machado of MCA Estudio.