Furry white fabric lines the interior of this winter-themed kid's bedroom, which Mireia Luzárraga and Alejandro Muiño of Spanish studio Takk have constructed inside their home in Barcelona.

Affectionately titled Winter Bedroom (for a Big Grrl), the self-contained structure was designed as a hideaway for the couple's young daughter.

It takes the shape of a 3.5-metre-high dome that tapers off into a narrow entrance on one side, resembling an igloo.

The project forms part of Takk's ongoing and continuous renovation of the warehouse space where its founders both live and build their large-scale architectural works.

"The house-workshop is a 400-square-metre space that can host the installations that we design and produce," Luzárraga told Dezeen.

"At the same time, the space is being colonised by some domestic spaces that condition it for living. It's continuously changing depending on the work that we are developing. Some of the pieces stay forever, and some of them are temporary."

Most of the materials used to form the Winter Bedroom are repurposed from Takk's previous projects, including the steel-chain curtain that covers the entrance in lieu of a door and the three layers of foam that line the dome's ceiling and its entire exterior.

Set on top of a wooden structure of vertical and horizontal ribs, the foam sheets serve seral purposes. For one, they maintain the all-white palette of the sleeping quarters and provide extra warmth in the industrial warehouse, which has plenty of space and light but little insulation. 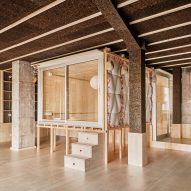 Unlike traditional cladding or wall panelling, the foam also moulds easily to the dome's rounded form.

"The flexible condition of the material easily adapts to the igloo shape," explained Muiño, who founded Takk together with Luzárraga shortly after the couple met in 2008.

Inside the bedroom, a snowy carpet covers not just the floor but also the walls and the raised platform that holds up the bed.

"The interior space has a floor at a height of 90 centimetres where the mattress lies, all covered in a white furry carpet ready to be enjoyed barefoot," Muiño said. "Below this big bed, there is a space for storing, playing or hiding."

Spherical lights integrated into the ceiling form what the studio describes as "a sky of bulbs", designed to create the impression of looking up at the stars.

Takk recently constructed another self-contained bedroom as part of an apartment renovation in Madrid, where the communal sleeping quarters are perched on stilts.