Opened on 19 March, Fashioning Masculinities: The Art of Menswear is the V&A's first retrospective exhibition that explores and celebrates the artistry and power of menswear and masculine attire.

The exhibition, which comprises over 100 looks and 100 artworks, explores how menswear has developed and changed over the centuries and how designers have unravelled the constructions of masculinity.

JA Projects divided the exhibit into three sections to take visitors on a journey from a classical piazza through to a modern metropolis.

V&A's senior curator of fashion Wilcox and curator of paintings and drawings McKever, told Dezeen that their selections aim to convey the different manifestations of menswear by providing glimpses into its different expressions.

"Every single piece has a connected twin whether it's in the form of a painting or sculpture or something that has some kind of synergy that makes sense of this sort of incomplete Kaleidoscope," said Wilcox.

"We're getting glimpses through chinks in the armour or chinks in the suit to see how men's clothing behaved or how men behaved in the clothing in the past and think about its connections to the present." 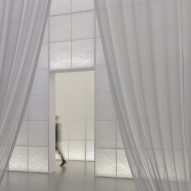 Studio 10 divides up Fashioned from Nature exhibition with translucent corridors

With the exhibition, the curators aim to counter the idea that menswear is less interesting than womenswear.

"This idea that menswear wouldn't be as exciting as womenswear – that's the thing we're hoping to completely dispel," said McKever.

"Not only is [menswear] as beautiful, as fascinating [as womenswear], it's fascinating that there are these power dynamics there that I think allows us to think about contemporary questions through fashion to take something that is a major question of contemporary life and use something as approachable as fashion as a way of thinking through it," she continued.

They also took the opportunity to consider how menswear and womenswear should be exhibited.

"It felt important for us to reflect on the idea of what does it mean to do a menswear show what are the boundaries of menswear?" said Wilcox.

"When is and isn't something menswear? That felt very interesting and something that felt fluid that we didn't want to answer in a set way," said McKever.

"Perhaps in the future there will not be menswear and womenswear shows anymore, that those boundaries are breaking down," said Wilcox.

Read on for Wilcox and McKever's eight highlights:

Fig leaf for the cast of Michelangelo's David, plaster, by D. Brucciani & Co, circa 1857

"We have thought about fashion and clothing found across the V&A and could not resist including this enormous fig leaf in our section on underwear.

"When Queen Victoria visited the museum and saw the enormous cast of Michelangelo's David, she was supposedly shocked by his nudity. This fig leaf was commissioned to cover the sculpture's genitalia. History was repeating itself, as Michelangelo's classically inspired, muscular male nudes had been censored before.

"Soon after the original marble David went on display in Florence in 1504, the authorities placed a garland of brass fig leaves around his waist.

"Michelangelo for many conjures the power of the male nude, but it is important to remember how contentious that continues to be 500 years later."

Portrait of Frances Stewart, later Duchess of Richmond, oil on canvas, by Jacob Huysmans, circa 1664

"This is one of many women hiding in plain sight in the exhibition. Frances Stewart was celebrated as a great beauty at the court of Charles II, whose affections she seemingly resisted.

"For this portrait, she is dressed as a soldier, with a military buff coat – with ample cotton shirting billowing from the sleeves – and the lace collar and cuffs and ribbon fastening which were the norm for men of high-status. She has even styled her hair like a man's periwig.

"The picture shows how complex, how blurred, the boundaries of masculine fashion are.

"We wanted to show the long history of gender non-conformity through dress as well as celebrating its contemporary visibility."

"This rare gem is part of the V&A collection, a beautiful example of doublet made of black silk shot through with silver, and lined with yellow silk, whose hue is still incredibly vivid to date.

"The iron compounds used to create black weakens the silk fabric, causing the doublet to deteriorate over time.

"Its fragility makes it a notable example of the transient nature of the relationship of fashion and time, and the fact that this is probably the last time it will be seen outside the storage make it a special object to enjoy."

"18th-century European men had no inhibitions about wearing pink, or intricate, all-over patterns. Rather than being considered feminine, a silk suit such as this from around 1765-70, with its matching coat, waistcoat and breeches, was an expression of power and wealth.

"This particular fabric was probably made in Lyons at a time when French fashions and textiles dominated luxury markets. The fabric – known as a 'tissue' because of the complex weaving technique – has an all-over design that at a distance seems abstract. However, on closer inspection, it consists of a pattern of delicate lace ribbons, embellished with yellow and blue flowers.

"During the 19th century, menswear became drained of colour, with the matching three-piece suit becoming a type of masculine uniform. Today, however, menswear is reclaiming the power of pattern and fashionable men, like those of the past, are enjoying the vigour of reds and pinks."

"A Fendi couture dress designed by Kim Jones, worn on the catwalk by model Ludwig Willsdorff. The dress belongs to the first collection designed by Jones for the Italian fashion house, which references a diverse set of inspirations: Italian sculpture, Fendi's archives, Virginia Woolf's novel Orlando and the strong and independent women of the Bloomsbury Group.

"Within the catwalk presentation, staged at the Paris stock-exchange or Bourse, the presence of both male and female models reinforced the collection's exploration of travel through time and gender.

"The dress is a synthesis, a contemporary example of 'literary couture': the construction features details from both menswear and womenswear, while the embroidery recalls the painted murals from Charleston in Sussex, home of Vanessa Bell and Duncan Grant.

"We think that designers today are brave enough to use recognisable codes and stereotypes – in this case, grace and daintiness – to challenge the binary, and very much agree with what critic Alex Fury said: 'The message of the clothes: masculine and feminine, romance and sensuality, delicacy and strength.' We did not ask ourselves if we consider this menswear or womenswear, because we do not think these labels reflect the way designers think and create in the present."

"Fashion and politics have an inherent connection, and we wanted to think about the suit as a means of democratising fashion. This photograph restages a 1797 portrait of the first Black deputy in the French government.

"In that painting, Jean-Baptiste Belley who was born in Senegal, bought his freedom from enslavement and fought in the Haitian Revolution, wears the French parliamentary uniform.

"In a period of sartorial as well as political revolution, Belley's tailored attire marked him as the equal of his Republican brothers. In Diop's reimagining – part of his 'Diaspora' series – the artist poses as Belley, emulating that uniform but also incorporating football-related props."

"Alexander McQueen's Autumn Winter 2009 menswear collection 'The McQueensbury Rules' was named after the Queensberry Rules of Boxing, first published in 1867. The show featured menacing, red-eyed models – some were actually boxers – wearing bowler hats and brandishing canes, as if they had stepped from the streets of Victorian London.

"19th-century tailors channelled masculine beauty into the body-sculpting construction and subtle details of the suit and frockcoat. Fine woollen cloth in a dark, sombre palette, expertly cut and moulded to the body, became the new status symbol. A century later, Savile Row-trained McQueen infused his collections with incisive tailoring that revolutionised both mens- and womenswear.

"In McQueen's hands, nothing was ever quite what it seemed; here, the outfit mixes his Gothic sensibility with Dracula-like tones in the form of a sweeping half-coat, half-cape, lined in bright white satin. A slashed away top half reveals a pristine white shirt, as if to assert that clothing is just a form of second skin."

"This is one of the largest, and yet most subtle works we display. It highlights the tension between individuality and anonymity which weaves through the histories of menswear and its manifestation in art and fashion.

"In it we see a besuited man who is rendered anonymous as much by his clothing as by the fact that we see him from behind. He could be anyone, especially among the dapper crowd of men in 1960s Italy, where mass-produced tailoring thrived. It's no coincidence that Pistoletto's hometown is Biella, the centre of Italy's wool industry.

"Yet being one of the artist's Mirror Paintings, while we look at the back of this man, we also see reflections of the besuited mannequins displayed nearby (or rather their backs) and are confronted with our own image. The enigmatic figure remains a constant while fashion changes around him. Every viewer sees something different in the work, has a different reaction to their own sartorial identity."

Fashioning Masculinities: The Art of Menswear is on show at the V&A in London until 6 November 2022. See Dezeen Events Guide for an up-to-date list of architecture and design events taking place around the world.