Designed by the late architect Zaha Hadid, the long-awaited Beeah Headquarters takes the form of a series "of interconnecting dunes" that echo its Al Sajaa desert surroundings.

The 9,000-square-metre building serves as a management and administrative centre for Beeah Group. According to Zaha Hadid Architects, it has a focus on sustainability to reflect the company's work.

It is powered by a solar array and meets LEED Platinum standards – the highest certification awarded by the green building certification program – setting "a new benchmark for future workplaces".

"The headquarters is the latest milestone for Beeah Group as it continues to pioneer innovations for Sharjah and across the globe, establishing a base of operations for the group to diversify into new, future-critical industries," said Zaha Hadid Architects.

"With their new headquarters, Beeah demonstrates how technology can scale sustainable impact and ultimately serve as a blueprint for tomorrow's smart, sustainable cities."

While echoing the surrounding sand dunes, the form of the Beeah Headquarters is also designed and orientated to withstand extreme weather conditions experienced on the site.

The building is powered by a solar array linked to Tesla battery packs, which the studio said meets the building's energy demand throughout each day and night.

Glazing is minimised across the office to prevent exposure to the harsh desert sun, while glass fibre-reinforced concrete panels across the exterior help to regulate internal temperatures.

There are also on-site water treatment facilities that filter wastewater to minimise consumption.

Inside, the building is divided into two wings. One houses the Beeah Group's public and management departments while the other contains the administrative zone.

These areas are connected by a central courtyard, described by Zaha Hadid Architects as an "oasis within the building" that helps provide natural ventilation.

A highlight of the interior is the building's 15-metre-high domed foyer, which has been designed to enhance natural ventilation and allow natural light to filter through. 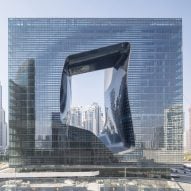 All internal spaces are positioned to ensure ample natural light and outward views without requiring expanses of glass.

A smart building management system has been incorporated to automatically adjust lighting and temperature depending on occupancy and the time of day.

Zaha Hadid Architects was established in 1980 by Hadid and is now headed up by Patrik Schumacher. It won the competition to create the Beeah Headquarters in 2013, which it designed in collaboration with engineers and consultants Atelier Ten and Buro Happold.

Other recently completed projects by the studio include a multi-level city park in Nicosia and the One Thousand Museum in Miami. This year it is also due to complete a palatial football stadium in China, which is featured in our roundup of 12 architecture projects to look forward to in 2022.