A cascading rooftop with photovoltaics will crown the Solar Cupola, a research centre that architecture studio BIG is designing for the European Commission in Seville, Spain.

Set to be built on the site of the 1992 Seville Expo, the 9,900-square-metre building will house facilities for the European Commission's science service, named the Joint Research Centre (JRC).

Solar Cupola will be distinguished by its roofscape, which BIG has designed as a chain of "solar canopies" that will incorporate photovoltaics and be supported by slender columns.

While producing electricity for the building, this roofscape will also shade a series of public spaces that echo shaded plazas and streets in Seville.

"With our design for the Joint Research Centre in Seville, more than anything, we have attempted to allow the sustainable performance of the building to drive an architectural aesthetic that not only makes the building perform better but also makes it more inhabitable and more beautiful," he explained.

BIG's design for Solar Cupola was the winning entry to an international competition for the building, which launched in 2021 and saw entries from 66 studios.

The building is expected to break ground in 2024 on a site diagonally across from the Jardin Americano riverfront and the Torre Sevilla market.

According to BIG, the building will help JRC meet its sustainability commitments support the goals of the New European Bauhaus – a design-led initiative focused on moving Europe to a circular economy.

It also "ties into the City of Sevilla's goal to become a global benchmark for sustainability by 2025", added the studio.

"The new building for the JRC Seville site is the ideal opportunity for us to walk the talk'," said JRC director Stephen Quest.

"The future building will be one of the first examples of architecture entirely inspired by the values of the New European Bauhaus, while achieving maximum energy efficiency and life cycle sustainability, an issue of utmost importance today."

Inside, Solar Cupola will contain 12 research units on its upper floors, positioned for privacy and security.

Its ground floor will contain the more public facilities, including a dining room, a conference centre and various other social spaces. 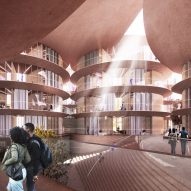 The different floors will be unified by two voids that puncture through the building, with staircases that link every level and encourage spontaneous encounters between employees.

However, according to BIG, the layout is easily adaptable if JRC's needs change in the future.

Outside, Solar Cupola will be complete with a mix of public and private outdoor spaces. This will include a plaza, overlooked by the collaborative offices, and a private garden viewable from the private workspaces for deep-focus.

BIG has also designed a stepped floorplate for the building, which will give rise to a series of terraces and breakouts spaces with views of the city.

The shallow floorplate and the cascading roof were designed to prevent overheating in the building by facilitating natural cross ventilation and providing solar shading respectively.

In turn, this is hoped to reduce reliance on artificial lighting and ventilation in the building.

BIG was founded by Danish architect Ingels in 2005. Today it has studios in Copenhagen, New York, London and Barcelona.

Elsewhere, the studio is currently developing a neuroscience centre in Denmark to "mimic" the human brain and a hotel room surrounded by birdhouses for a hotel in Sweden.