BIG has begun construction on its CityWave building, which will visually connect the towers of Milan's CityLife development with a low swooping roof that doubles as one of Italy's largest urban photovoltaic power stations.

The Danish architecture studio has designed the fourth building for the site, which contains towers by Zaha Hadid Architects, Daniel Libeskind and Arata Isozaki.

BIG won a competition to design the fourth building year with a proposal "to complete, not compete" with the existing buildings at the CityLife district, a mixed-use development located a short distance outside of Milan's old city centre.

The architecture studio broke ground on the buildings last week, and at the same time revealed renderings that have been updated to include a full canopy of photovoltaic panels on the roof.

The roof will now extend to more than 200 metres in length, with around 11,000 square metres of panels capable of producing an estimated 1,200-megawatt hours of power a year. BIG believes it may be the largest urban integrated solar canopy in Europe.

Speaking at a lecture during last week's Milan design week, BIG founder Bjarke Ingels reflected that the brief had initially asked for one or two new towers to complete the masterplan, but that his team decided to go in another direction.

"When we went on the first site visit, we took the Metro train, and the Metro [stop] is called Tre Torri ["three towers"]," said Ingels. "So we thought it might create some unnecessary confusion if it's suddenly four or five towers."

"And also, our contribution was going to be the last and actually the shortest," he continued. "It felt like a competition we could not win. So we thought, instead of competing with the three masters, we could sort of try to complete the ensemble by imagining this new entrance."

The architects designed a 12-storey and 22-storey building connected by a curved canopy.

This both provides a visual connection between the assortment of buildings and creates a gateway to the city beyond, integrating CityLife with surrounding streets and infrastructure.

"We tried to sort of organise the mass as low as possible, based on the European typology of a perimeter block rather than a tower," said Ingels.

"Rather than the architecture of the individual buildings, the space between them actually becomes this very generous new public space that is shaded from the sun and shielded from the rain." 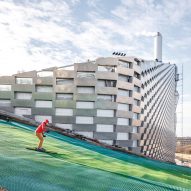 He said that "just like a classic portico", the outdoor space would have columns. However, because they act as tension rods that hold down the canopy rather than keep it up, they will be very thin.

The canopy will be made of a sheet of dowel-laminated veneer lumber – a type of mass timber made from softwood lumber panels joined together with hardwood dowels.

As well as providing solar power, the structure will enable rainwater collection.

Within the buildings, there will be 63,000 square metres of leasable office and retail space.

The West building will include a conference centre at ground level with a near-300-seat auditorium as well as three secondary halls, and a restaurant and sky bar at the top.

Inside, a giant sculptural staircase will visually connect the first five floors, while a cascading series of terraces under the open roof connects the subsequent floors.

"All of the levels are actually connected to each other underneath the continuous diagonal of the roof," said Ingels.

"So that even if you are working in a company that is split over five or six levels, you can actually visually and physically connect to your colleagues in this sort of cascading space."

The East building will have a similar arrangement of space, but incorporating an atrium and winter garden across the ground and first floors.

Both buildings will feature internal courtyards that increase access to natural light and air.

All in all, passive design strategies, including triple glazing, are expected to bring the energy requirements for CityWave 45 per cent below the standard office block, and the building will be powered exclusively by renewable sources.

BIG hopes to complete work on CityWave in 2025.

Other recent works by the practice include the CopenHill "ski plant" in Copenhagen and the spiralling double-helix Marsk Tower in southwestern Denmark.