Soler Orozco Arquitectos and Javier Sánchez have created a spa that is shaped like a truncated cone and lit by a dramatic skylight in a dense Mexican jungle.

The project is located in Tepoztlán, a mountainous town roughly 50 kilemetres from Mexico city.

"Tepoztlán enjoys a certain mystique for its pre-Hispanic past and its reputed creative and curative energies," according to Soler Orozco Arquitectos and Javier Sánchez.

"The client for this project — an avid athlete — wanted a house embedded within this setting as a space dedicated to improving people’s physical and emotional wellbeing," the team added.

The spa building was completed in 2021 and contains a series of wellness spaces within a cone-shaped structure clad in volcanic stones. These rooms include a gym, massage studio, sauna, and a cold plunge pool.

From the outside, the mass of the building is a stone mound topped by a rounded platform. This structure is in fact a terrace that the architects describe as a "borderless shape that cannot be grasped as a whole".

The occupants enter the spa from below via an opening that cuts through the mound-like form, a procession that leads to a central space lit by a skylight.

"The circular floor plan has radial spaces around a central area left almost as a void, lit from above by a round skylight that lets sun and water filter through," said the architects.

"This skylight occupies the centre of the 20-meter-diameter green roof-dish that acts as an impluvium to collect the rainwater that then filters down into the underground cisterns," they added.

Off the circular corridor that surrounds the central chamber are the rooms which include the massage area, sauna, and restrooms. The ground floor gym is connected to a terrace.

The interiors of the spa were completed using natural finishes including brick floors, plaster walls, and wooden accents for doors and furniture.

Much of the interior is lit by wall sconces, lending the space an intimate, subterranean feeling.

From the central chamber, a flight of stairs leads up to the rooftop. Here, the architects included plenty of vegetation, making the building appear almost invisible when seen from above.

"As its guiding design principle, the spa needed to blend into the site without impinging on the landscape, keeping the architecture out of view," said the team.

On this plane, the architects included a fire pit, hot tub, and outdoor lounge area overlooking the surrounding mountains. 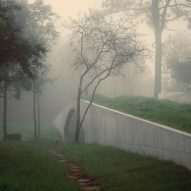 "The upper program is perfect for contemplation, a place where guests can enjoy dawn, dusk, and the night around an open fire or in a hot tub," the team explained.

"Ensconced amid mountains and beneath a vast sky, the infinitely green valley also has a seasonal river flowing through it – panoramic views spread out in every direction," said the architects.

Other spa projects include a "self-care club" in Washington DC by US firm Snarkitecture, and a spa in Hangzhou with "cavernous" interiors made up of circular rooms finished in white clay.

The photography is by Jaime Navarro.