Icelandic architect Arnhildur Palmadottir has revealed her "radical and gigantic" Lavaforming proposal at this year's DesignMarch festival in Reykjavík.

Lavaforming would see controlled lava eruptions being used to create buildings, which according to the designer would be substantially more sustainable than those built with steel and concrete.

"Lava is the building material of the earth, but instead of letting landscapes form naturally over millions of years we can take over Earth's building process and produce a whole city for humans in a few weeks," Palmadottir told Dezeen.

"It would mean that we have a sustainable source of building materials that can itself also produce the energy needed to handle and process it."

Above: Arnhildur Palmadottir explained her Lavaforming proposal during this year's DesignTalks. Top: lava would be directed into chambers to create building material

Lavaforming was exhibited at the Ásmundarsalur art gallery in Reykjavík during the 2022 edition of DesignMarch by Palmadottir, who is the founder of architecture practice SAP.

Her proposal envisions boreholes being drilled into the earth to reach molten lava, which can then be directed into controlled flows.

She proposes three ways that the lava could be used to make buildings. Firstly it could be directed into chambers to cool into required forms that could be used as a traditional building material.

The Lavaforming concept was developed by Palmadottir in response to the growing awareness over the carbon dioxide (CO2) emissions connected to construction and in particular concrete.

She developed the proposal to demonstrate that construction requires radical change to become more sustainable.

"The project started by looking at modern building materials – their carbon emissions and effects on the environment," said Palmadottir.

"Lavaforming is the architecture of a technologically advanced society that has abandoned profit maximisation and is, therefore, free to explore solutions to the building material crisis of the world." 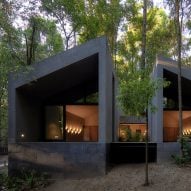 "We work and live in systems that are fixed and predetermined, we have supply chains that run smoothly and have been fine-tuned so that we can get products, buildings and food in a simple and fast way", she continued.

"Changing this is not easy and this is what is preventing us from taking real steps to reduce carbon dioxide emissions and the effects of climate change. But it also makes you think, what would happen if we think outside of those systems and if we look at things from a different angle."

While Palmadottir believes that the proposal could be realised, she acknowledges that it is unlikely to become a reality. She hopes, instead, it will demonstrate the scale of the issue facing the architecture and construction industry.

"In one way the project is a naive attempt at proposing a new way of building and we want to push this idea as far as we can because we believe this will happen," she said. "On the other hand, we want to convey the hopelessness of modern architecture and the future."

"We are basically saying 'this is the only logical and rational solution to the climate crisis we have no other answer when it comes to making the building industry truly sustainable,'" she continued.

"So if this radical and gigantic undertaking is the only avenue for a sustainable building method, imagine how fucked we are."

Palmadottir presented her proposal during DesignMarch as part of the DesignTalks programme during a session focused on the role of design in shaping alternative futures.

DesignMarch took place from 4-8 May 2022 in Reykjavík, Iceland. See Dezeen Events Guide for an up-to-date list of architecture and design events taking place around the world.