We continue our deconstructivism series by looking at the CCTV Headquarters in Beijing by Rem Koolhaas' studio OMA, a building that redefined the traditional form of skyscrapers.

Situated on a prominent site on Beijing's Chang'an Avenue, the 54-storey tower known locally as "big pants" for its distinctive shape, was designed to house the headquarters and production facilities for state-owned China Central Television.

The gravity-defying building became was a significant work of deconstructivist architecture, in part because of the theories developed by OMA founder Rem Koolhaas that underpin its unusual design.

Koolhaas had argued in his influential 2003 publication, Content, that the form of most skyscrapers had become cliched and it was time to consider new approaches to designing tall buildings.

In one of the book's chapters titled Kill the Skyscraper Koolhaas claimed that "the skyscraper has become less interesting in inverse proportion to its success. It has not been refined, but corrupted."

The CCTV Headquarters was an attempt to present an alternative format for high-rise buildings that reinforced a sense of community rather than separating people into individual tower blocks.

"An explicit ambition of the building was to try to hasten the end of the skyscraper as a typology, to explode its increasingly vacuous nature, loss of program, and refuse the futile competition for height," he claimed.

"Instead of the two separate towers of the WTC, there was now a single, integrated loop, where two towers merge."

Unlike traditional vertical high-rises, the 234-metre-tall building comprises two towers that lean against each other and are connected on their upper floors by a 75-metre cantilevered linking element.

The result is described as a "three-dimensional cranked loop" that allows employees and visitors to move unimpeded through the building.

This reinvention of a familiar typology aligns with the definition of deconstructivism as a movement focused on breaking the rules of modern architecture.

The building's distorted configuration of fragmented architectural elements also contributes to a seemingly random form that is distinctly deconstructivist.

OMA won a competition in 2002 to design the headquarters for the television broadcaster, along with the adjacent Television Cultural Center (TVCC), which houses a broadcasting theatre, cultural facilities, and a five-star hotel.

The design was led by Koolhaas, Ole Scheeren (who left OMA in 2010), partner David Gianotten, and project manager Dongmei Yao. Architectural and engineering support was provided by Cecil Balmond at Arup, along with East China Architectural Design & Research Institute.

The building's form is determined by its programme, with each area dedicated to a specific function.

A 10,000-square-metre lobby connected to the Beijing subway is situated in a podium with three underground floors and three storeys above ground.

One of the two towers that rises from the podium houses an editing area and offices, while the other is dedicated to news broadcasting.

The vertical elements are joined at the top by a cantilevering bridge used for administration, which is called the Overhang. This ten-storey linking element also houses restaurants and cafes, along with an observation deck.

A web of triangulated steel braces that extends across the building's exterior highlights the innovative structural solution. The irregular grid provides the primary support and expresses visually the forces travelling through the structure, with denser areas supporting greater loads.

The structural design also had to contend with movement caused by wind, as well as the need to withstand seismic activity. Expansion and contraction caused by temperature changes required the two towers to be joined together at a specific time in the morning when both were at a uniform temperature. 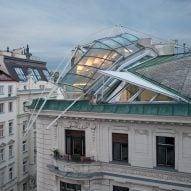 The building is clad in fritted glazing that reduces unwanted solar gain and softens the monolithic form, creating a soft, silver-grey colour that helps the structure blend in with the city's often polluted skies.

Even before its completion, critics of the CCTV Headquarters took aim at its unusual form, which is often referred to by locals as resembling a pair of "big pants".

The building is cited as an example of the radical architecture that appeared across China during the country's construction boom in the early 2000s, when big-name European architects were frequently commissioned to create landmark projects.

In 2014, Chinese president Xi Jinping said that "no more weird architecture" would be built in China, without referring specifically to the CCTV Headquarters.

In response to the president's comments, Koolhaas told Dezeen "I don't have the slightest difficulty in saying, or showing, or demonstrating, that CCTV is a very serious building."

The architect added that the project "introduces new ways of conceptualising, liberating and realising structure that did not exist in China before, and of which I'm sure Chinese culture and Chinese architecture will benefit."

In 2013, ten years after declaring he wanted to "kill the skyscraper", Koolhaas accepted an award for the best tall building of the year from the Council on Tall Buildings and Urban Habitat (CTBUH) for the CCTV Headquarters.

The irony of the award was not lost on Koolhaas, who admitted that his campaign against the design of uninspiring skyscrapers was "completely unsuccessful". He added, however, that he felt moved to be "part of a community that is trying to make skyscrapers more interesting."

The CTBUH judging panel was fulsome in its praise for CCTV, proclaiming that it "singlehandedly paved the way from the height-obsessed, set-back skyscraper of the past to the sculptural and spatial skyscraper of the present, at the scale of the urban skyline."

The firm gained notoriety with a series of controversial studies and international competition entries in the 1980s and 1990s, before going on to complete a number of high-profile commercial and cultural projects around the world.

Koolhaas has responded to regular criticism for working in authoritarian countries including China and Qatar, suggesting that the west is missing out on important conversations about architecture and urbanism due to its "sense of superiority".

OMA has completed numerous projects in China and southeast Asia, including an industrial-style exhibition centre in Shanghai, and the futuristic Taipei Performing Arts Center in Taiwan, which is set to open this year.

Deconstructivism is one of the 20th century's most influential architecture movements. Our series profiles the buildings and work of its leading proponents – Peter Eisenman, Frank Gehry, Zaha Hadid, Rem Koolhaas, Daniel Libeskind, Tschumi and Prix.

The photography is by Philippe Ruault unless stated.