Canadian start-up Aurea Technologies has developed a portable wind turbine that compacts down to the size of a water bottle and was designed to provide reliable, renewable energy on the go.

Intended for use during camping trips or in emergency situations, the Shine Turbine can collect as much as three phone charges worth of power in an hour.

When not in use, its three rotor blades can be folded down to create a compact, torpedo-shaped package around the size of a one-litre bottle.

The turbine weighs less than 1.4 kilograms and has a power-to-weight ratio of 29.5 watts per kilogram, which according to Aurea Technologies makes it more efficient than any comparable solar panels, thermoelectric stoves or water turbines.

This is due to wind's "cubic relationship with power", the company explains.

"This, paired with Shine's high-efficiency blades and lightweight design, allows it to produce the most amount of energy for the least amount of weight compared to any other portable renewable charger."

While portable solar chargers are reliant on direct sun exposure, the company says the Shine Turbine works in a wide range of conditions including wind speeds from 13 to 45 kilometres per hour and temperatures from zero to 40 degrees Celsius.

It can either charge devices directly or store the electricity in its internal battery, which can hold about four full phone charges.

The turbine's body and blades are made from weatherproof polycarbonate plastic while the mount and motor enclosure are made from aluminium. 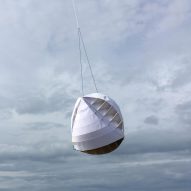 It takes about two minutes to set up the Shine Turbine using the accompanying pegs and guy wires, according to Aurea Technologies.

"We're offering wind power that fits in your backpack," Adalay said. "Wind is the second-largest producer of clean energy in the world, yet most people don't have direct access to it."

"As a team of outdoor enthusiasts with backgrounds in science and engineering, we set out to create a wind power product that gives users the freedom to produce their own clean energy day or night, rain, cloud or shine."

Aurea Technologies was founded in 2017 and is based in Nova Scotia, Canada. The company launched the Shine Turbine on crowdsourcing platform Kickstarter in 2021 before putting it into production.

Other recent innovations in wind power include the giant offshore Windcatcher, which holds 117 turbines in a vertical grid, and the wind-powered street light Papilio.

There is also the O-Wind Turbine, which is designed for high-density urban environments and won the James Dyson Award in 2018.