Miguel Concha has renovated a historical building in the Mexican city of Querétaro to create new gallery spaces for the work of painter Santiago Carbonell.

The original structure, which dates back to 1760, was converted into a museum by the Santiago Carbonell Foundation, an organisation dedicated to preserving and showcasing the work of Carbonell, a Mexican-born painter who grew up in Spain and is known for his realistic portraits. He currently resides in Querétaro.

The foundation commissioned architecture studio Miguel Concha Arquitectura to revitalise the building, convert the existing rooms into galleries, and create a new rooftop terrace for the museum.

"What used to be rooms are now galleries that house important works of art," said the architecture studio, which is based in Querétaro.

"The strategy of reuse of the existing building starts from recovering the original structure and making minor modifications to allow the adaptation of the building to its new use as a museum," they added.

The street-facing facade was restored and covered with a smooth plaster surface, painted grey. Aspects of the historic building, including a door and window, were preserved, indicating the age of the compact structure.

In the centre of the gallery is a courtyard, allowing the wings of the gallery to receive some indirect natural light. Colonial homes in Querétaro often have this feature, which is well suited to the region's harsh sunlight.

The courtyard functions as a breezeway that connects the entrance with the various galleries along the sides and at the back of the structure.

"A patio, distinctive of the Querétaro houses of the time, connects and illuminates all the galleries," said founder Miguel Concha. "Art, architecture and history interact, combining everything in a timeless atmosphere," he added.

To avoid excessive glare, the architects installed a retractable cloth shading system over the courtyard and also installed wooden slats to cover some of the windows and doors.

At the back of the space, the architect's intervention is more apparent. A new, raised ceiling supported by steel beams spans the width of the building, creating a more spacious gallery where existing walls were removed.

These steel supports rest on new columns, to avoid interfering with the building's original stone walls.

"The main gallery is created thanks to the steel elements that support the new roof, a light structure that does not affect the integrity of the original structure," said the architect. 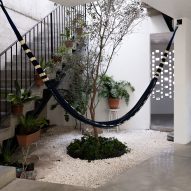 Within the main gallery, a new staircase leads up to the roof, where visitors can look out onto the neighbouring streetscape. Upstairs, there are several casual seating areas for museum visitors' use.

The interiors of the space are finished with earthy tones of beige and olive. Additionally, some of the building's original walls and floor joists were left exposed, highlighting the historical nature of the space.

"This cozy and intimate space subtly mixes robust historical elements with light structures, recovering the spatial qualities of the old construction that has been intervened to adapt to a public and cultural dynamic," said Miguel Concha Arquitectura.

Other homes in Querétaro include a villa that was converted to a boutique hotel with eclectic interiors and a home for a young couple and their dogs also built around a courtyard.

The photography is by Ariadna Polo.